More than 63,800 people dead from virus as world economy nosedives amid shutdown 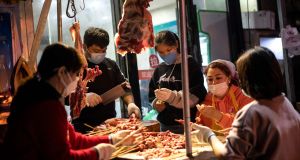 Workers prepare meat for barbecuing at a market in Wuhan, in China’s central Hubei province, on Saturday. Photograph: Noel Celis/AFP/Getty

Global cases of coronavirus have far exceeded one million, with more than 63,800 fatalities in total and with death tolls soaring in the United States and western Europe.

At least 63,832 people across the world have now died as a result of the pandemic, according to researchers at Johns Hopkins University. The number of confirmed cases passed a million on Friday with at least 1,170,159 people infected by Saturday evening.

The true scale of the outbreak is likely to be greater due to suspected underreporting by some nations.

The number of people infected in the US exceeded a quarter of a million, and the death toll climbed past 7,000, with New York state alone accounting for more than 2,900 dead, an increase of over 560 in just one day.

Another hot spot, Louisiana, reported that the number of deaths rose from 310 at noon on Thursday to 370 at noon on Friday. That marked the biggest 24-hour increase in fatal cases yet in the Gulf Coast state.

A total of 441 people died from coronavirus infections in France over the past 24 hours, down from a high of 588 the previous day, the health ministry director said on Saturday.

The death toll in French hospitals and nursing homes since the start of the outbreak now stood at 7,560, Jerome Salomon told a news conference.

The total number of coronavirus cases in France stood at 68,605 on Saturday, a 6.6 per cent increase compared with the previous day.

In Spain, the total death toll rose to 11,744 - the world’s second highest - on Saturday from 10,935 the day before, the Health Ministry said, representing a 7 per cent increase in total deaths after a 9 per cent rise on Friday.

That is less than half the pace of the around 20 per cent increase registered a week ago.

A total of 809 people died from the disease over the past 24 hours, down from Friday’s 932 and Thursday’s daily record of 950, the figures showed.

Italy recorded 766 more deaths, which was relatively steady when compared to those seen the previous day. The rate of new infections continues to slow, raising hopes of turnaround. Some 85,388 people are currently infected, with an increase of 2,339 new cases; 138 fewer than Thursday.

However, Italy remains the world’s worst-hit country, having suffered a total of 14,681 deaths.

The Falkland Islands government confirmed the island territory’s first case. The patient has been hospitalised since March 31st and developed a range of Covid-19 symptoms, tested positive for the virus, and is now in a stable condition and being cared for with necessary isolation procedures.

The number of cases detected in Egypt jumped to 985, the country’s health ministry said. It announced 120 new cases and eight more deaths, bringing the total number of fatalities to 66.

Albania reported 27 new cases - its second biggest daily increase - and ordered a third 40-hour lockdown over the weekend to halt the spread of the highly contagious pathogen that has killed 17 in the country so far. – Agencies