Travel advisory for New York, New Jersey and Connecticut issued instead of quarantine 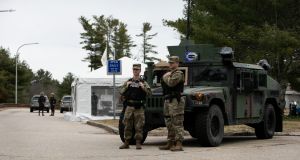 The National Guard and Rhode Island State Police at a checkpoint at the Rhode Island-Connecticut state border on Saturday to advise New Yorkers to maintain a 14-day quarantine after arriving leaving the state. Photograph: Kayana Szymczak/The New York Times

US President Donald Trump considered then abandoned ordering a quarantine for the coronavirus hotspots of New York, New Jersey and Connecticut.

Mr Trump announced in a tweet that the quarantine, which it was unclear if he had the power to order, would not go ahead and a travel advisory would be issued instead.

The advisory urged residents of the three states to avoid all but essential travel for two weeks.

New York governor Andrew Cuomo had said earlier that roping off states would amount to “a federal declaration of war”.

Meanwhile, Mr Cuomo postponed his state’s presidential primary from April to June as nurses made anguished pleas for more protective equipment and rebuffed officials’ claims that supplies are adequate.

The governors of Florida, Maryland, South Carolina and Texas have ordered people arriving from the New York area to self-quarantine for at least 14 days upon arrival.

In a more dramatic step, Rhode Island police have begun pulling over drivers with New York plates so that the National Guard can collect contact information and inform them of a mandatory, 14-day quarantine.

....Federal Government. A quarantine will not be necessary. Full details will be released by CDC tonight. Thank you!

The US leads the world in reported cases with more than 115,000. There were roughly 1,900 deaths recorded by Saturday.

All 50 states have reported some cases of the virus but New York has the most, with over 52,000 positive tests for the illness and more than 700 deaths.

About 7,300 people were in New York hospitals on Saturday night, including about 1,800 in intensive care.

Meanwhile, a gun rights group has welcomed the Trump administration’s designation of the firearms industry, including retailers, as part of the nation’s critical infrastructure during the coronavirus emergency.

The designation by the federal Cybersecurity and Infrastructure Security Agency is advisory.

The agency notes that the designation does not override determinations by individual jurisdictions of what they consider critical infrastructure sectors.

The firearms industry was not part of the federal agency’s original list of critical infrastructure issued just over a week ago.

The designation came in an update following a brewing legal battle between gun rights groups and California officials.

The group Gun Owners of America said in a statement that it is encouraged that the Trump administration is not ignoring what it calls “the ability to protect yourself” during the emergency stemming from the pandemic.

Gun rights groups initiated a lawsuit last week after the Los Angeles County sheriff closed gun shops in the wake of California governor Gavin Newsom saying that each of the state’s 58 counties could decide for themselves whether to list firearms dealers as non-essential businesses that should be subject to closure while the state seeks to limit the spread of the virus.

The lawsuit claims that the designation violates the second amendment, the right to keep and bear arms, but officials said it was a public health issue.–PA