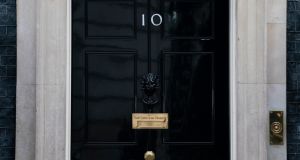 Exterior view of the 10 Downing Street, on Monday morning. British prime Minister Boris Johnson has been admitted to hospital 10 days after being tested positive for coronavirus. Photograph: Will Oliver/EPA

British prime minister Boris Johnson was undergoing tests in hospital on Monday as he is still suffering coronavirus symptoms 10 days after testing positive, but the UK government insisted he remained in charge.

Mr Johnson, who had been isolating in Downing Street after testing positive for the virus last month, was taken to hospital on Sunday night because he still had a high temperature and his doctors felt he needed additional tests. His office and ministers said Mr Johnson (55) continued to run the government, that the prime minister was doing well and that he would undergo “routine tests” as a precaution, though Downing Street declined to say which tests he would have. “He’ll stay in hospital as long as he needs to do that, but I’ve heard that he’s doing well and I very much look forward to him being back in Number 10 as soon as possible,” housing secretary Robert Jenrick said. “This isn’t an emergency admission and so I certainly expect that he’ll be back at Number 10 shortly,” he said, though he gave no time frame. On March 27th, Mr Johnson became the first leader of a major power to announce that he had tested positive.

It was not clear how an ill prime minister could lead the government’s emergency response to the outbreak from a hospital. Some medics told Reuters it was unclear what was meant by precautionary tests for Covid-19 complications. With only an unwieldy collection of sometimes ancient and contradictory precedents to go by, there is no formal succession plan should the prime minister become incapacitated. Foreign secretary Dominic Raab chaired the government’s emergency Covid-19 meeting on Monday.

Mr Johnson’s pregnant fiancée Carrie Symonds said on Saturday that she was “on the mend” after spending a week in bed after also suffering coronavirus symptoms.

The 32-year-old, who is expecting the couple’s baby in early summer, has been self-isolating in Camberwell, south London, with the couple’s dog Dilyn.US president Donald Trump was among the well-wishers, starting Sunday night’s White House press briefing by saying Mr Johnson was “a great friend of mine” and adding: “I’m sure he is going to be fine, he’s a strong man, a strong person.”

In a rare televised address to the nation, Queen Elizabeth personally thanked frontline NHS staff, care workers and others for “selflessly” carrying out their essential roles which had brought “us closer to a return to more normal times”.

She thanked others for staying at homes, separated from friends and family, and echoed the words of British forces’ sweetheart Dame Vera Lynne’s second World War anthem, when she said “we will meet again”.

Scotland’s first minister Nicola Sturgeon said Dr Calderwood would no longer be the public face of the country’s campaign to tackle the coronavirus after photographs of the medic visiting her holiday home in Earlsferry, about an hour’s drive from Edinburgh, were published in the Scottish Sun.

“I did not follow the advice I’m giving to others, I’m truly sorry for that,” Dr Calderwood said at a news conference on Sunday.

The UK’s department of health said the number of reported coronavirus-related hospital deaths had risen by 621 to 4,934 as of 5pm on Saturday, up from 4,313 the day before. British health secretary Matt Hancock warned outdoor exercise could be banned if people continued to flout the social distancing rules. – PA and Reuters