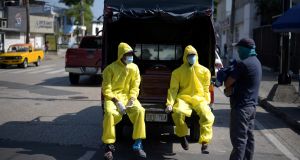 Ecuador’s government has begun storing the bodies of victims of coronavirus in giant refrigerated containers as hundreds of deaths in the city of Guayaquil, the centre of the country’s outbreak, have already filled morgues and hospitals.

Ecuador has confirmed 318 deaths from the virus, one of the highest tallies in Latin America. But president Lenín Moreno said this week that the real figure was higher as authorities were collecting more than 100 bodies a day, many from relatives’ homes as a strict quarantine prevented them from being buried.

The government has installed three containers, the largest about 12 metres long, at public hospitals to preserve bodies until graves were prepared, according to Guayaquil’s mayor, Cynthia Viteri. So far 150 victims have been buried in a private cemetery in the port city.

At Guayaquil’s Teodoro Maldonado Carbo hospital on Saturday, medical workers wearing protective gear removed bodies wrapped in plastic from a storage room and used a pallet to wheel them to one container.

“This pandemic is overcoming the capacity of our hospital services,” the hospital said in a statement on Friday.

The hospital on Sunday confirmed that it had set up a refrigerated container to hold the bodies of those who died amid the pandemic, adding that the arrangement was being operated in accordance with World Health Organisation protocols.

The Ecuadorean Institute of Social Security, which runs Teodoro Maldonado Carbo hospital, said on Saturday on Twitter that it had disinfected all areas of the hospital to guarantee the safety of patients and medical professionals.

On Saturday, Ecuador’s government said it would activate a new digital system that would allow families to find out where their dead relatives were buried.

Mr Moreno said the government expected the total number of deaths in Guayaquil’s surrounding province to reach up to 3,500, and said a “special camp” was being built to bury the dead.

In Brazil, an opinion poll at the weekend found a majority want president Jair Bolsonaro to remain in office despite mounting criticism toward his handling of the coronavirus outbreak.

The survey, conducted by Datafolha and published by the Folha de S Paulo newspaper, showed that 59 per cent of the 1,511 respondents would oppose Mr Bolsonaro’s resignation, while 37 per cent would approve such a move.

Brazil’s death toll rose to 431 from 359, while the number of confirmed cases jumped to 10,278 from 9,056, according to health ministry figures released on Saturday afternoon. Mr Bolsonaro has on multiple occasions downplayed Covid-19 as a “little flu”, stirring up conflicts with governors and even his own health minister for advocating social distancing measures he sees as economically disastrous.

The number of people killed by coronavirus in Canada has jumped by just over 20 per cent to 258 in a day, officials said on Sunday, while the government offered full-time jobs to reservists in the armed forces.

By Sunday morning eastern time, the number of those diagnosed with Covid-19 had risen by almost 12 per cent to 14,426, the public health agency said. The respective figures on Saturday were 214 deaths and 12,924 positive diagnoses.

The outbreak looks set to tip the economy into recession, and the liberal government of prime minister Justin Trudeau has already announced a major stimulus package. Mr Trudeau said officials were contacting reservists to offer them full-time jobs for the coming months.

“Bolstering the military’s ranks will help offset some of the economic consequences of Covid-19 and ensure our communities are well supported,” he told a daily briefing.