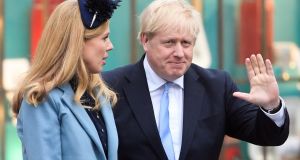 A file photograph of Boris Johnson and his partner Carrie Symonds. The British prime minister has been taken into hospital for tests due to having persistent coronavirus symptoms. Photograph: Toby Melville/Reuters.

Boris Johnson has been admitted to hospital for tests as he continues to show symptoms of the coronavirus.

The British prime minister has been in self-isolation for 10 days after contracting the virus and Downing Street said he went into hospital on Sunday night on the advice of his doctor.

“This is a precautionary step, as the prime minister continues to have persistent symptoms of coronavirus ten days after testing positive for the virus. The prime minister thanks NHS staff for all of their incredible hard work and urges the public to continue to follow the government’s advice to stay at home, protect the NHS and save lives,” a spokesman said.

Mr Johnson, who has chaired daily meetings on the coronavirus by video link from his flat in Downing Street, remains in charge of the government. Sources said his was not an emergency admission to hospital but was taken so that doctors could examine him in person.

A Number 10 spokesman said Mr Johnson has not handed responsibilities to his de facto deputy Dominic Raab. However, Mr Raab is likely to chair the daily Covid-19 meeting on Monday morning for ministers and officials, which is usually led by the prime minister. He is understood to be in an NHS hospital in London, where he will stay for “as long as needed”.

The news of Mr Johnson’s admission to hospital came an hour after Queen Elizabeth invoked the spirit of the second World War in a televised address to the British people, urging them to unite and cooperate in the face of the coronavirus.

Mr Johnson on March 27th became the first leader of a major power to announce that he had tested positive. He went into isolation at a flat in Downing Street and said on Friday he was staying there as he still had a high temperature.

When announcing that he had the virus, Mr Johnson (55) said he was tested after developing a temperature and a persistent cough.

“I’m working from home and self-isolating and that’s entirely the right thing to do,” he said in a video posted on Twitter.

“But, be in no doubt that I can continue thanks to the wizardry of modern technology to communicate with all my top team to lead the national fightback against coronavirus.” - Additional reporting: Agencies