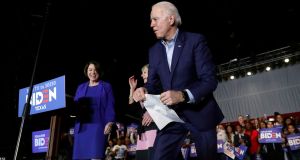 Millions of Americans go to the polls on Tuesday to cast their vote for their preferred Democratic presidential nominee, after the field of candidates vying to take on US president Donald Trump in November’s presidential election narrowed dramatically.

In a remarkable turn of events, several big name candidates who had been rivals to Joe Biden in the primary race threw their support behind the former vice-president on the eve of Super Tuesday, in a bid to unite the moderate wing of the party and stem the rise of Bernie Sanders, who is leading in polls.

Having dropped out of the race, both Amy Klobuchar and Pete Buttigieg flew to Texas on Monday night to endorse Mr Biden, who was campaigning there, one of 14 states to hold primaries on Tuesday.

Speaking alongside Mr Biden ahead of the rally, Mr Buttigieg said that the former vice-president had the integrity and policy positions that would propel him to the presidency, highlighting his commitment to issues like climate change and gun control. Stressing the “need to bring back dignity to the White House”, Mr Buttigieg said he was urging his supporters to back Mr Biden.

“I’m looking for a president who will draw out what is best in each of us, and I’m encouraging everybody who was part of my campaign to join me, because we have found that leader.”

In emotional comments alongside Mr Buttigieg, Mr Biden thanked him for his support, comparing him to his son Beau, who died from cancer at the age of 46. “Such enormous character, such intellectual capacity and such a commitment to other people,” Mr Biden (77) said of the former mayor of South Bend, Indiana, adding that he had already asked him to join his team if he is elected president.

Shortly after, Ms Klobuchar joined Mr Biden on stage in Dallas, where she endorsed her former rival.

“Joe Biden has dedicated his life to fighting for people , not for the rich or the powerful, but for the mom, for the farmer, for the dreamer, for the veteran,” she said, adding that Mr Biden would govern with his heart as well as his head. “It is a time for a president that will bring decency and dignity back to the White House.”

“Joe knows you and he will fight for you. I cannot think of a better way to end my campaign than joining his,” she said.

Mr O’Rourke, who has kept a relatively low profile since quitting the race last year, explained why he was backing Mr Biden as he took to the stage at the rally. “We need somebody who can beat Donald Trump. The man in the White House today poses an existential threat to our country, to our democracy, to free and fair elections . . . In Joe Biden we have someone who is the antithesis to Donald Trump.”

Mr Biden, who failed to capture the public imagination for much of the primary campaign, is hoping to capitalise on his resounding victory in South Carolina on Saturday. He won an impressive 48 per cent of the vote in the southern state, reflecting his strong support among African-American voters.

But Vermont senator Mr Sanders – who narrowly lost the 2016 Democratic nomination to Hillary Clinton – remains the front-runner going into the Super Tuesday contests.

Following victories in New Hampshire and Nevada, as well as winning the popular vote in Iowa, Mr Sanders is well ahead in the polls. Crucially, he is ahead in California – the biggest state in the union, with the largest number of pledged delegates needed to secure the party’s nomination at the Democratic National Convention in July.

Voters in 14 states, as well as the American territory of American Samoa, will cast ballots in primaries on Tuesday. A third of all delegates will be decided in the Super Tuesday contests, with the nominee chosen at the Democratic National Convention in Milwaukee in July.

At his final rally before Super Tuesday in Minnesota on Monday night, Mr Sanders invited the supporters of Ms Klobuchar and Mr Buttigieg to join him. Ms Klobuchar’s decision to withdraw from the race on the eve of Tuesday’s voting is likely to pave the way for Ms Sanders to win her home state of Minnesota.

Tuesday will also be the first time former New York mayor Michael Bloomberg will be on the ballot, having made the strategic decision to sit out the first four primary states. The billionaire businessman was continuing to dominate TV advertising across the country on Monday and said he had no plans to drop out.

Elizabeth Warren, the only woman left in the race, is hoping to sweep up delegates in several states on Tuesday having not yet won a primary contest. But she could be facing a tough battle in her home state of Massachusetts where Mr Sanders has been rising in the polls and attracting huge crowds at campaign events.

The withdrawal of several high-profile centrist candidates in recent days signals an effort to consolidate the moderate wing of the party as Mr Sanders surges ahead.

Both Mr Buttigieg and Ms Klobuchar occupy similar ideological ground to Mr Biden, and the former vice-president’s campaign is arguing that he is the best candidate to stop Mr Sanders winning the nomination – an outcome they believe would deliver the election to Mr Trump in November.

But Mr Sanders has created a formidable ground campaign, rooted in strong support among young voters and Latinos.