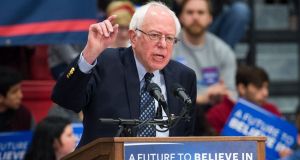 “The Sanders surge is placing pressure on the remaining candidates to consider their positions. The lowest-ranking candidates such as Amy Klobuchar, billionaire Tom Steyer, and Tulsi Gabbard are still in the race.” Photograph: Michael B Thomas/AFP/Gett

The race to become the Democratic Party nominee for president just got interesting. On Saturday Bernie Sanders swept to victory in Nevada, the third state to hold its primary contest to select a presidential nominee. Sanders’ victory was not unexpected. The veteran socialist and senator from Vermont had been leading the polls in the western state, after winning New Hampshire and the popular, though not the delegate, vote in Iowa.

But what unnerved his rivals and the Democratic establishment was the nature of that victory. Sanders broadened his support base significantly from the primary contest of four years ago when he challenged Hillary Clinton to the party’s nomination. While often associated with the “Bernie bros” of the 2016 campaign – the predominantly white male vote that made up the bulk of his support – Sanders widened his coalition in Nevada. His command of the youth vote was solid – 66 per cent of voters aged between 17 and 29 in the Nevada caucuses backed him. But he also made inroads into other demographics. A quarter of college-educated women voted for him, much higher than for any other candidate including the two female candidates Elizabeth Warren and Amy Klobuchar, who secured 17 and 18 per cent respectively. Mr Sanders also won 53 per cent of the Hispanic vote according to entrance votes – about three times as much as Joe Biden, his nearest rival – a performance that will worry the seven other candidates as the contest moves to more racially diverse states like California and Texas.

The other issue concerning Mr Sanders’ rivals is timing. Support is consolidating behind Sanders just as the primary contest enters a critical stretch. By next Tuesday – when the 14 ‘Super Tuesday’ states choose their nominee – 40 per cent of the delegates that will go to the Democratic National Convention in July will have been decided. That percentage rises to 60 per cent by March 17th. Delegates are pledged to vote for whichever candidate won the caucus or primary lection in their states.

The prospect that Sanders may have an insurmountable delegate lead by the middle of next month is alarming many in the Democratic political establishment. While the senator’s supporters say he has the energy and enthusiasm to motivate voters in November and would be a formidable opponent to Donald Trump on the debate stage, party stalwarts believe a socialist Democratic nominee would be manna from heaven for Donald Trump who has already painted Democrats as a party of crazed socialists.

Some Democrats who are running for Senate and House seats and in contests for state and local offices elections in November are also getting nervous about the impact of a Sanders nomination on their own prospects. Already, Republicans have been targeting vulnerable Democrats in Republican-friendly districts, by linking them to Sanders. An ad run by Republican Martha McSally of Arizona last week labels her Democratic challenger Mark Kelly as a “Bernie Bro”. “Kelly and Sanders – too liberal for Arizona,” the narrator intones.

Sanders’ solid lead in the polls has also raised comparisons with the 2016 Republican campaign when Donald Trump benefitted from the large Republican field, and the lack of a strong alternative.

Four years later it appears that Sanders may be stealing a march on the nomination while his rivals fight among themselves. Less than nine months before November’s presidential election, the Democratic field has yet to winnow significantly, with eight candidates still in the race.  The trend of the past few months has effectively seen Democratic candidates split the vote. Even Sanders’ lead in the latest national poll – 28 per cent – is hardly commanding. Anecdotally Democratic voters, desperate to beat Donald Trump, are finding it difficult to choose between candidates. But the failure of moderates to coalesce around a single candidate may hand the nomination by default to Sanders.

Whether he achieves a majority of delegates by July is not certain, but he is likely to win a plurality. Given the controversy over Clinton’s nomination at the 2016 national convention, Democrats could be heading towards a brokered convention, though Sanders’ supporters are likely to viscerally argue that the fact he has won the most delegates – if not the required majority – means that he should be the nominee.

The Sanders surge is also placing pressure on the remaining candidates to consider their positions. The lowest-ranking candidates such as Amy Klobuchar, billionaire Tom Steyer, and Tulsi Gabbard are still in the race. Second-tier candidates like Elizabeth Warren and Pete Buttigieg are also showing no indications they will quit. Former candidate Andrew Yang who dropped out earlier this month put it well this weekend when he said that someone needs to “pull an Andrew Yang” and quit the race.

But that seems unlikely before Super Tuesday. Candidates like former vice-president Joe Biden and billionaire businessman Mike Bloomberg could seize back momentum in the coming weeks.

A likely scenario is that Biden wins Saturday’s South Carolina primary, the last contest before Super Tuesday, allowing him to stay in the race. Similarly, Bloomberg is not to be underestimated given his colossal fundraising machine, despite his dismal debate performance last week.

In the meantime, Sanders is likely to face renewed scrutiny in the coming days, starting with tonight’s debate in South Carolina. Sanders has largely emerged unscathed from the debates, watching as the candidates in the early debates tried to take down front-runner Biden and then newcomer Bloomberg last week. Now it is his turn to defend his front-runner status.

The problem for the Democratic candidates is that it may be too late. Sanders’ formidable ground campaign in several states, building on an election infrastructure created in 2016, has allowed him to build up a healthy lead in communities around the country. Underestimating the Sanders effect and how his message of change resonates with voters, particularly young people, may cost his rivals the nomination.