Man (24) dies in fire in migrant detention centre in Libya

A 24-year-old man has died after a fire broke out at a migrant detention centre in Zintan, Libya. 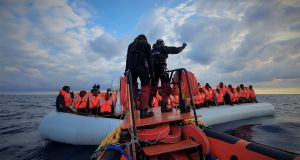 Migrants are pictured during a rescue operation off the coast of Libya in the Mediterranean Sea. Photograph: Hannah Wallace Bowman/MSF/Handout via Reuters

A 24-year-old man has died and many more were injured after a fire broke out in a migrant detention centre in Libya, in which hundreds of refugees and migrants who have been caught trying to reach Europe have been locked up.

The fire broke out in the centre in Zintan, 182km southwest of Tripoli, at about 5am on Sunday, according to four detainees interviewed by The Irish Times. It happened in a hall where people with tuberculosis were being held.

“How the fire started, we still don’t know because everyone was sleeping,” said an Eritrean man at the centre, communicating through Facebook messages. “The fire and smoke became beyond our capacity. As a result, this tragedy happened.”

“We are in great risk,” another Eritrean man at the centre said on Monday, after phoning The Irish Times through WhatsApp. He said detainees were traumatised and suffering mentally. “They are just in a bad condition.”

Many of those detained were caught trying to cross the Mediterranean Sea in 2017, the same year the EU made a deal with the Libyan coast guard to carry out interceptions in the sea, significantly reducing the number of migrants and refugees who reach Europe. The EU has spent nearly €100 million on supporting the coast guard.

About 500 people are locked up in Zintan, which has been nicknamed the “Guantanamo” of Libya by some refugees.

Last June a leaked UN report said more than 80 per cent of detainees in Zintan may have tuberculosis, while at least 22 detainees had died – including a 16-year-old girl and a father and young son. The boy’s mother, who is in contact with The Irish Times, said she had begged for him to be taken to hospital but no one helped.

The report also confirmed that the bodies of Christians who died in the centre were not being buried, partly because the local community insists their cemetery is only for Muslims.

Since May 2019, the aid agency Médecins Sans Frontières has been working in Zintan, leading to improved health conditions, though detainees say they are still suffering massively and desperate to get out.

While international organisations are now giving medical care to injured detainees and handing out blankets, one of the Eritrean men said they needed to be relocated to a safer country. “This cannot be a conclusion . . . We need you to just help.”

“Most of the refugees are desperate. Imagine staying in Libyan prison for three years,” said another detainee.

“The death of this young man in detention is yet another reminder of the dire and inhumane conditions in Libyan detention centres,” said Safa Msehli, a spokeswoman for the International Organisation for Migration, whose staff have visited the centre. “This tragedy was avoidable and it is unacceptable for this system to continue despite repeated calls to dismantle it,” she said.