US Politics: Sanders and Warren want nothing more radical than taxing the 1% 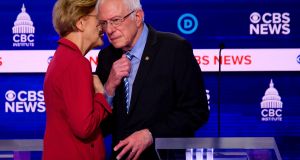 Elizabeth Warren and Bernie Sanders: Policies imply tax as a burden, not what the jurist Oliver Wendell Holmes defined as “what we pay for civilised society”. Photograph: Jim Watson/AFP via Getty Images)

American democracy plays out in the classical splendour of Washington and in domed statehouses from sea to rising sea. It also plays out in Las Vegas’s Bellagio Ballroom number six, between Frank Sinatra Drive and a chain diner with the unpromising name of Eggslut. There is no doubt as to the more impressive spectacle.

Hotel housekeepers, still uniformed and name-tagged, are among the low-paid Nevadans who caucus for Bernie Sanders as the Democratic presidential nominee. In going to his side of the chandeliered room, they have somewhat bucked their formidable union. The invisibility of cleaners has become a cinematic trope (Roma, The Chambermaid) but these ones are momentarily of world import.

That Sanders wants to improve their lot is not in question. Some leftists choose purism over half a loaf, but he tends to vote for what redistributive measures come before him in Congress. He would give Americans universal healthcare, statutory paid leave and other staples of the developed world. This has encouraged the notion that he – and his rival Elizabeth Warren – would Europeanise the US. The likeliest heir to these septuagenarians, congresswoman Alexandria Ocasio-Cortez, is another who looks admiringly across the ocean.

So widespread is the idea of convergence with Europe, and so true in parts, it is also incumbent to state where it breaks down.

What the US left appears to want is social democracy as understood by Robin Hood. It would tax astronomical wealth to fund popular programmes. It would not ask much more of the middle or even the upper middle classes. Warren’s signature tax spares all households with a net worth below $50 million. Sanders has more people in his crosshairs but still zeroes in on the very rich.

With an election in the offing, this selective approach to revenue is hard to fault. There are lots of votes in a raid on Wall Street. There are fewer in a raid on the handsome suburbs around Tampa. Politicians have to be artists of the possible.

This does, however, put them at some odds with the social democrats of Europe, who tax more citizens more heavily. Denmark does not achieve fiscal receipts of 45 per cent of national output by going after a gilded sect of its population, languidly rolling Fabergé eggs to each other across marble floors. Nor does France (46 per cent) or Germany (38 per cent).

The US tax take is just 24 per cent. The purring Train à Grand Vitesse, the social mobility that is more than theoretical – Democrats are right to want these things for their country. They just misunderstand the implications for tax policy. Or rather, they understand them all too well and choose to duck the resultant politics. Even the party’s most progressive field for a generation or two does not contemplate taxes that are European in breadth and depth.

Pressed on this point, Democrats invoke the sage that was Willie Sutton. The criminal of yore targeted banks because, he said, with unanswerable logic, “That’s where the money is.” In a country with America’s titanic inequalities, the top 1 per cent is where the money is. It is the obvious percentile to press for revenue.

Not all economists are certain these numbers work out. Doubts over costing have helped to all but kill Warren’s campaign. But even if the arithmetic is sound, there is the larger issue of principle. In targeting just the richest, Democrats rather imply that a welfare state is only worthwhile insofar as someone else pays for it. It is not an inherent good. It is not a nation’s binding agent.

In this sense, the Sanders and especially the Warren platform is a tacit concession to the Republican view of the world, with tax as a burden, not what the jurist Oliver Wendell Holmes defined as “what we pay for civilised society”. The Democratic appeal is less to Nordic universalism and solidarity than to the noblesse oblige of a remote overclass who will not miss the money.

You can sense that Sanders burns to make the higher case: that patriotism entails a material commitment to one’s fellow citizens, not just flag-waving and anthem-warbling, those tellingly inexpensive pursuits. But then President Donald Trump wants him to make it too.

The implied taxes would have middle-class voters, including those who abhor him, wondering at the cost of a presidential change in November. The Democrats understand this no less well. And so even the most left-wing bunch in decades proposes a social democracy that is not very social, nor all that democratic, and as European as the Eiffel Tower that disfigures the Vegas Strip. – Copyright The Financial Times Limited 2020