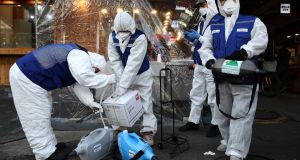 The European Union is monitoring the spread of the coronavirus “around the clock” and announced €232 million to prevent a global outbreak of the Covid-19 virus on Monday.

South Korea and Iran reported sharp rises in coronavirus infections on Monday, triggering concern from the World Health Organization (WHO), but China relaxed some curbs on movement, including in Beijing, as the rate of new infections there eased.

The virus has put Chinese cities into lockdown, disrupted air traffic to the country and blocked global supply chains for everything from cars and car parts to smartphones.

“There should be no doubt left – this is a global challenge. It requires the co-operation of the entire international community,” said EU commissioner for crisis management Janez Lenarcic. “Our goal is to contain the outbreak at a global level.”

“With more than 2,600 lives lost already and the epidemics affecting already 28 countries worldwide, the spread of Covid-19 demands our full attention. It is the time for us to act as a Union,” he added.

It comes as confirmed cases of the virus rose to 150 in Italy over the weekend, forcing authorities to temporarily close a train route between Italy and Austria, putting the bloc’s Schengen area of free movement under strain.

The number of cases in Italy rose above 200 on Monday and a sixth person died from the virus.

The virus threatens to affect upcoming EU events, with a planned EU-China summit in Beijing under question. The EU Commission has limited staff travel to essential trips only, and employees returning from Macau, Hong Kong and China have the option to work from home for 14 days.

The EU Commission is not currently advising the closure of national borders, but has urged member states to coordinate and react proportionally according to scientific evidence.

The aid package of €232 million is divided between €114 million to the World Health Organization, a planned €15 million for efforts to combat the virus in Africa, €100 million for research and €3 million for the repatriation of EU citizens from the epicentre of the virus in Wuhan, China.

Health policy is in the hands of national authorities. The EU Commission has currently received no notification from member states that border controls will be introduced to battle the outbreak, a commission spokesman said. Borders can be closed on national security grounds.

European Union institutions are closely monitoring the coronavirus outbreak and it may affect a planned EU-China summit, an EU diplomat said on Monday.

“We are actually having some informal discussions on the summit preparations in terms of how coronavirus will influence the preparations,” the diplomat said. “We are monitoring the situation very closely and there are some decisions to be made as well.”

The summits between China and its largest trading partner the EU are held annually in spring, and the 22nd had been expected to take place in Beijing at the end of March. This year is seen as crucial for EU-China relations, with profound questions over security and technology on the table such as whether to allow telecoms giant Huawei to provide key 5G wireless infrastructure.