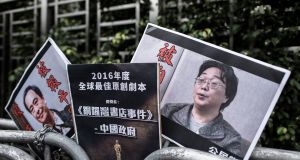 A Chinese court has sentenced a Swedish bookseller to 10 years in prison on charges of illegally providing intelligence overseas, in what human rights observers have called a “deplorable verdict . . . on completely unsubstantiated charges”.

The court in the eastern Chinese city of Ningbo announced on Monday that Gui Minhai, a China-born naturalised Swedish citizen, had admitted to his crime and would not be appealing, and had reinstated his Chinese citizenship.

China does not recognise dual nationality and it was not immediately clear if he had initiated proceedings to give up his Swedish citizenship.

Mr Gui (55) ran a Hong Kong publishing house and bookshop known for gossipy, salacious titles that skewered the leaders of the Chinese Communist Party. While such publications are banned in mainland China, they are legal in Hong Kong as the city enjoys freedom of expression rights and other liberties under the “one country, two systems” framework.

He was one of five people associated with the publishing house who disappeared in 2015, in a case that sparked widespread alarm about Hong Kong’s future and the erosion of its freedoms.

Mr Gui was believed to have been abducted by Chinese security agents from his resort home in Pattaya, Thailand. Like his four colleagues, he was held incommunicado for months and resurfaced in detention in mainland China.

In a televised confession – one that his daughter and rights observers said was made under coercion – he admitted involvement in a hit-and-run incident that had taken place a decade earlier, and to the smuggling of illegal books.

He was released into house arrest after two years in prison but was arrested again in 2018 while on a train to Beijing, travelling with Swedish diplomats to get medical attention in the capital.

Mr Gui appeared on national television once more following his arrest on the train, blaming the Swedish government for sensationalising his story and tricking him into an attempt to flee China.

“I fell for it. My wonderful life has been ruined and I will never trust the Swedish ever again,” he said, in another confession his supporters said was coerced.

Mr Gui’s family and rights groups say he is the victim of political persecution in a system that does not tolerate criticism or dissent.

Under president Xi Jinping, China maintains iron-clad control of information flows and has detained and silenced many activists, lawyers, public intellectuals and writers in recent years.

Since the outbreak of the coronavirus Beijing has further tightened its grip, reprimanding and threatening whistleblowers, detaining citizen journalists and outspoken academics, and rigidly controlling online activity.

Swedish foreign minister Ann Linde said it had not been informed about Mr Gui’s trial and was not given access to him or allowed to see the charges.

“We have the right to gain access to Swedish citizens. We have demanded it, but didn’t get it,” she told Swedish media. “We demand Gui Minhai’s release.”

Sweden’s former ambassador to China, Anna Lindstedt, is under investigation in Stockholm for allegedly acting outside the bounds of her authority in relation to the case.

Swedish prosecutors claim she overstepped her duties when trying to engineer Mr Gui’s release by arranging an unauthorised meeting with his daughter and some well-connected Chinese businessmen.