With Buttigieg and Klobuchar out, the Stop Sanders campaign has begun

Former Indiana mayor Pete Buttigieg has annouced the end of his presidential campaign. The 38 year-old veteran was the first openly gay candidate to run for the Democratic nomination. Video: Reuters 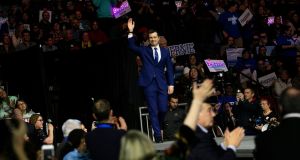 Pete Buttigieg is ending his campaign for the Democratic nomination for the 2020 presidential elections. Photograph: Katherine Taylor/EPA

The decisions by former South Bend, Indiana mayor Pete Buttigieg and senator Amy Klobuchar to end their US presidential campaigns has significantly changed the dynamic of the Democratic race. But the underlying message is clear.

The Stop Sanders campaign has begun.

The strong performance by Bernie Sanders in the early voting states of the Democratic primaries last month has unnerved the Democratic establishment. The veteran socialist senator from Vermont is ahead in the Democratic race to become the party’s nominee, decisively winning Nevada and New Hampshire and winning the popular vote in Iowa.

His ascent – built on a formidable ground campaign and a constant flow of individual campaign contributions – has taken the Democratic establishment by surprise, and raised inevitable questions about the size of the Democratic field.

From the outset of the primary season it was evident that the large number of candidates, particularly on the so-called “moderate” side of the party, was splitting the non-Sanders vote. This trend was underscored by the arrival of Michael Bloomberg on the campaign trail.

Though the former New York mayor has yet to contest a primary contest, his campaign has undoubtedly eaten into Joe Biden’s and other moderates’ votes, freeing up Sanders to build on his lead.

Biden’s resounding win in South Carolina on Saturday – the fourth state to hold its selection process and the last before this week’s Super Tuesday’s contests – may in part be a reaction to Sanders’s strong performance in the previous few weeks. Voters in the first southern state to hold its primary – a more conservative Democratic voter base than states like Nevada or California – may have felt compelled to give Biden their vote, amid reports that Sanders was in poll position to secure the party’s nomination.

Buttigieg’s decision to pull out of the race on Sunday – which took place shortly after a meeting between him and former president Jimmy Carter but before a phone conversation with Barack Obama – is undoubtedly positive for Biden. He is more aligned to Biden than any of the other candidates in the race, though he he had yet to endorse a candidate on Monday night.

Buttigieg unapologetically ran on a centrist platform, promising medicare “for all who want it” and believing he could win over Independent and Republican voters in the presidential election.

“This is a major boost for Joe Biden going into Super Tuesday,” said Andrew Yang, a former candidate who pulled out of the race last month.

Amy Klobuchar was due to fly to Dallas on Monday night where she was expected to endorse Biden. Though the mid-western senator has fewer delegates to date than Buttigieg, and a smaller support base, her backing is important nonetheless, even though her withdrawal runs the risk that Sanders could win her home state of Minnesota, which votes on Tuesday.

Whether this is the start of a concerted, strategic effort by moderate Democrats to align behind a single candidate is unclear.

There are now questions about whether Bloomberg will stand down from the campaign after Super Tuesday and throw his weight behind Biden.

While Elizabeth Warren has shown no signs that she will step down, it in fact could make strategic sense for the Biden campaign to encourage her to stay in the race. Given the overlap between Sanders and Warren in terms of policies and supporters, she could act as a brake on Sanders’s support, depriving him of an absolute majority as the contest gathers pace.

But whether Buttigieg’s and Klobuchar’s announcements are enough to shift the campaign’s momentum to Biden is uncertain. With just three days between the South Carolina primary and the Super Tuesday contests, Biden has a tiny window to capitalise on his new-found momentum.

The latest polling shows that Sanders is well-positioned to win California, the largest state in the union, which votes on Tuesday. Similarly, he is ahead in Texas, though Biden could have a better chance there.

Other southern states that vote on Tuesday also have more potential to fall for the former vice president, though they have fewer delegates than the larger states such as California and Texas.

In a sign of the internal party battle ahead, Sanders pulled no punches at a campaign rally in California on Sunday evening, taking aim at Biden’s decision to vote for the Iraq war.

As the Democratic race for president enters a decisive phase, the next few weeks are likely to be critical for the party as it chooses the candidate to take on President Donald Trump in November.