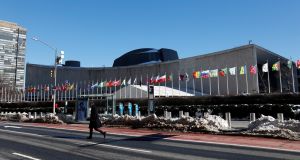 United Nations building in New York: Hopes are high a new administration in Washington will signal a shift in US policy towards Israel and Palestine. Photograph: Jason Szenes

Winter’s icy grip descended on New York this week, burying the streets under a foot of snow.

But like many cities across the world struggling with the coronavirus pandemic, work continued behind closed doors.

At the United Nations on First Avenue, looking out over the East River, the corridors and conference rooms have been quiet for months. Most of the staff at the UN have been working from home since the pandemic hit; diplomats at the hundreds of permanent missions to the UN scattered around the city have also become used to a new kind of diplomacy as face-to-face encounters have become rare and virtual meetings the new norm.

It’s five weeks since Ireland assumed a seat on the UN Security Council, joining Norway as the winner of two coveted spots on the 15-member body.

This is the country’s fourth time in the role.

The previous terms overlapped with major world events. In 1981-1982, the Falklands War erupted at a delicate moment in Irish-UK relations during the Thatcher premiership. Israel’s invasion of Lebanon in 1982 also commanded the world’s attention.

This week the first unexpected foreign policy crisis of this term emerged, as events in Myanmar escalated. On Sunday night, news filtered through that Aung Sang Suu Kyi and other government leaders had been detained in pre-dawn raids. It quickly became apparent that a military coup was under way.

Throughout the week frantic efforts took place by the UN and US to make contact with the deposed leaders but to no avail. Engagement with the military also proved elusive, with allies such as Japan and India who have maintained relations with the generals offering the best hope of any communication.

On Tuesday, Britain, which holds the rotating presidency of the security council this month, scheduled an emergency meeting. A joint statement was finally agreed on Thursday despite dissent from China.

The Myanmar crisis has encapsulated one of the challenges facing the council as its seeks to offer more than just words in its response to global security events – China’s effective veto as one of the five permanent members. Tension between the US and China is likely to be the central dynamic of Ireland’s two-year stint on the body.

In the meantime, an array of other international issues are competing for attention, with Ireland taking the lead on several matters in the first month of its tenure. This week, Irish officials initiated a much-needed discussion on the humanitarian situation in the Tigray region of Ethiopia. Ireland also partnered with Niger in adopting a security council statement on West Africa and the Sahel, further reflecting the country’s historic interest in Africa.

Similarly, Ireland, along with Norway, is managing humanitarian efforts in Syria, including on the Turkish-Syria border.

Ireland may also have a key role in one of the issues likely to dominate attention in the coming months and years, following its appointment as facilitator of the Iran nuclear deal. Although efforts to resurrect the 2015 deal will predominantly take place between the signatories of the pact, the deal was underpinned by Security Council Resolution 2231.

The first few weeks of the new term have also seen a focus on the Israeli-Palestinian conflict. Following last week’s special discussion on the Middle East, Irish ambassador Geraldine Byrne-Nason presented the views of current and former EU members of the security council. Welcoming the recent announcement by the Palestinians of elections later this year, she called for “free, fair and inclusive” elections.

“Participative, representative and accountable democratic institutions based on respect for the rule of law and human rights are key for Palestinian self-determination and state-building,” she said.

Hopes are high that a new administration in Washington might signal a shift in US policy towards the region. Incoming US ambassador Linda Thomas-Greenfield has not yet been approved by the US Senate amid Republican concerns about her past comments on China. But the acting US ambassador expressed the Biden administration’s commitment to a two-state solution, marking a break with the Trump presidency.

Though still early days, the advancement of peace in the Middle East and a recognition of the rights of Palestinians and Israelis would be an important legacy of Ireland’s latest term on the United Nations’s most powerful body.