Biden has reversed the policy of providing diplomatic, intelligence and logistical backing to the Saudis and their Emirati partners 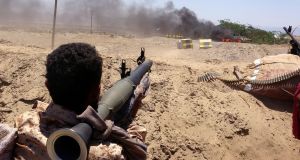 A fighter of the Southern Transitional Council watches as a military vehicle belonging to Saudi-backed government forces burns during clashes in the southern Abyan province of Yemen. Photograph: AFP via Getty Images

The Biden administration’s decision to end US support for Saudi Arabia’s offensive war in Yemen amounts to a decisive shift in US policy and heralds an effort to resolve the six-year conflict.

While depriving Riyadh of essential means to wage war, the US seeks to empower its Yemen envoy Tim Lenderking with means to negotiate peace.

President Joe Biden has reversed the policy of the Obama administration, in which he served as vice-president, of providing diplomatic, intelligence and logistical backing to the Saudis and their Emirati partners and providing them with offensive weapons used in the war.

The potential loss of US training of Saudi air crews, maintenance of Saudi warplanes and targeting of military objectives could cripple the flagging Saudi air offensive, the kingdom’s main contribution to the campaign against Yemeni Houthi rebels.

The United Arab Emirates, which had initially deployed ground troops, scaled down it involvement when soldiers returned home in body bags.

Fighting, hunger and illness which have taken 230,000 Yemeni lives are blamed on Saudi crown prince Mohammad Bin Salman, who as minister of defence in March 2015 launched the conflict in concert with his Abu Dhabi counterpart Mohammed Bin Zayed.

Their aim was to reinstall Yemen’s interim president Abed Rabbo Mansour Hadi in Sana’a, Yemen’s capital, following his removal by Houthis after he rejected demands for fair representation and tackling corruption.

The princes justified their war by falsely claiming that the Houthis were Iranian surrogates, an accusation that prompted Iran to extend diplomatic backing and limited military support to the rebels, who control the north and govern 80 per cent of the population. Having made a small investment of medium-range missiles and drones, Iran has bested the Saudis.

After spending $100 billion, Saudi-led forces have failed to subdue the Houthis and instead have battled Emirati-allied southern separatists for control of the south.

As the instigator of a war in the region’s poorest country, where 80 per cent of the population rely on external aid to survive, the Saudi crown prince is expected to come under pressure to make peace.

He is in a weak position. Although he has lifted medieval conservative cultural and social constraints on Saudis, he has imprisoned family members and dissidents, thereby negating his image as a reformer. If he baulks the Biden administration could use as leverage the Central Intelligence Agency report on his role in the 2018 murder of Saudi journalist Jamal Khashoggi in the Saudi consulate in Istanbul. Turkey.

Before negotiations can begin the Biden administration will have to drop its predecessor’s designation of the Houthis as “terrorists”, which also threatens humanitarian assistance and trade.