As Washington readies for inauguration, Covid-19 is refusing to concede

America Letter: Capital is managing to control virus, but rest of US not faring so well 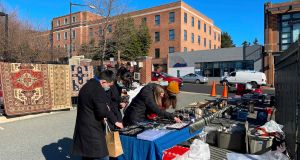 As residents of Washington, DC process the events of the past 10 days, which saw supporters of Donald Trump mob the Capitol and thousands of armed soldiers stream into the city ahead of next week’s inauguration of Joe Biden, another crisis has been continuing in the background.

America’s political standoff has dominated news coverage, but the coronavirus pandemic has not gone away.

Just as Trump was being impeached this week for the second time, the US announced a record number of Covid-19 deaths in a single day: 4,200 recorded on Tuesday; the total death toll in the US is now approaching 385,000.

Here in Washington, the city’s handling of the pandemic has been relatively successful. Though infection rates saw a post-Christmas spike, mirroring the jump after Thanksgiving, the District of Columbia has reported just 32,000 cases since the pandemic began.

While the number is somewhat misleading, given that many people live in the surrounding states of Virginia and Maryland, the city has nonetheless done a relatively good job in containing the spread.

Free public testing has been available in locations across the city, including in the many low-income, majority black communities that make up so much of Washington’s demographic profile. A culture of testing has been in place here since late spring, with most people getting tested on a regular basis or after travelling.

Though mayor Muriel Bowser has been criticised for not opening the public schools, her handling of the pandemic has managed to keep widespread infection at bay.

Optimism surrounds the rollout of vaccines too. As armed National Guard members descended on Capitol Hill this week, I saw a queue of firefighters and elderly at-risk patients gathered outside the foyer of a Kaiser Permanente healthcare facility near the Capitol, awaiting their vaccinations.

A family member who visited the doctor for a minor procedure was treated by nurses who had all received their first doses of vaccines – and that was in late December.

But the picture is very different across America. Over the last few weeks troubling stories have come in from around the country. A friend phoned about her mother, who was admitted to an Arizona hospital with Covid-19, while her father was unable to get a test. Having contained the surge over the summer, Arizona is once again a coronavirus hotspot.

In California the picture is equally bleak. Another concerned friend described how her brother-in-law’s condition worsened in Los Angeles after contracting the virus and he is now on oxygen at home as the hospitals reach capacity.

With Biden due to prioritise a coronavirus recovery plan when he assumes office next week, public health officials are continuing to sound the alarm bell about infection rates.

This week, the Centers for Disease Control and Prevention (CDC) – the main federal health protection agency – announced sweeping changes to its vaccination rollout advice, as the number of vaccinations administered lagged behind the target rate.

It ordered all of the country’s vaccine supply, including second doses that had been held back, to be made available and for states to begin immunising over-65s rather than just healthcare workers prioritised in the first wave.

The move followed reports that some states were struggling to use the vaccines they had available. In some cases this was due to low take-up – Ohio’s governor said 60 per cent of nursing home workers were refusing to take the shot. In contrast, in Florida, seniors queued overnight in their cars to access vaccinations after the state’s governor, Ron DeSantis, broke with original federal guidelines and said that over-65s would be prioritised.

By this week, states across the country including New York and New Jersey, and Washington, DC, adopted the new CDC guidelines and expanded their vaccination criteria to over-65s and people with specified underlying conditions, though New Jersey’s decision to include smokers in the programme was controversial.

The uneven rollout of the vaccination programme is another reminder of the US’s lack of an integrated healthcare policy, as individual states are charged with managing vaccinations. Just as America’s handling of the coronavirus pandemic varied state by state last summer, with governors opposed to mask-wearing and strict social-distancing rules seeing steep rises in infections in their states, once again the success of the vaccine rollout will depend on the political leadership in each state.

Joe Biden’s announcement of an ambitious $1.9 trillion coronavirus economic plan this week, including a national vaccination plan, is welcome. But implementing it in a country with a federal system such as the United States will be a challenge.