Biden’s message of unity has never seemed so relevant

America Letter: The destructive end to Trump’s presidency may act as a catalyst for Republicans to work with Democrats 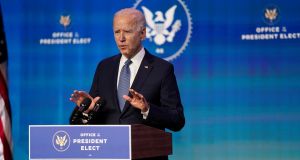 President-elect Joe Biden speaking in Wilmington, Delaware, on Wednesday. He abandoned his prepared remarks and addressed a shocked nation as the attack on the Capitol was unfolding. Photograph: Doug Mills/The New York Times

In the midst of this week’s anarchy and destruction at the US Capitol, there was a moment of clarity, a moment of dignity.

Joe Biden, who will become US president in less than two weeks, had been scheduled to deliver remarks about the economy in Wilmington, Delaware, on Wednesday afternoon. Then the assault on the Capitol started. Biden quickly abandoned his prepared remarks, and instead addressed a shocked nation as the attack was unfolding in real time.

“This is not dissent; it is disorder, it is chaos. It borders on sedition, and it must end – now. I call on this mob to pull back and allow the work of democracy to go forward,” he said, before turning his attention to Donald Trump.

“I call on President Trump to go on national television, now, to fulfil his oath and defend the constitution and demand an end to this siege. It is insurrection... the world is watching.”

Trump’s response was to tweet a short video, in which he made a half-hearted call for his supporters to leave the Capitol and told them he loved them. “I know your pain, I know you’re hurt. We had an election that was stolen from us.”

Biden, whose strategy since the election has been broadly to ignore Trump’s ramblings in a bid to avoid stoking any more division, will now take the helm at the White House in the wake of an almost unthinkable attack on the nation’s democracy.

The message of unity that underpinned his presidential campaign, even when he appeared unlikely to win the Democratic nomination a year ago, has never seemed so relevant.

Even before this week’s shocking events Biden’s task in leading the country had been fundamentally transformed by two Senate elections in Georgia on Tuesday.

In any other week the Democrats’ victories in the twin contests would have dominated the news cycle. Two Democratic challengers, Jon Ossoff, a 33-year-old filmmaker, and Raphael Warnock (51), a pastor at the historic Ebenezer Baptist Church in Atlanta where Martin Luther King jnr once preached, dislodged incumbent Republicans David Perdue and Kelly Loeffler.

Loeffler, who is married to the head of the New York Stock exchange, had been hand-picked by Georgia governor Brian Kemp in 2019 to fill the seat vacated by retiring senator Jonny Isakson. Trump was furious about the decision at the time, but Kemp believed Loeffler would appeal to middle-class female voters in Georgia’s suburbs who were deserting the Republican party in droves. Instead she embraced Trumpism and ran further to the right in a desperate and ultimately unsuccessful attempt to secure her seat.

There is also poetic justice in a week where a white-majority mob overran the Capitol, that Georgia, a state with a shameful history of racial injustice and segregation, is sending its first black senator to Washington.

“Welcome to the new Georgia,” Warnock said on Wednesday. “It is more diverse. It’s more inclusive. It readily embraces the future. And I’m the product of that.”

Though his words were spoken on Wednesday morning before the storming of the Capitol, they could have easily been directed at the lone Trump supporter who was photographed marching through the Capitol rotunda carrying a confederate flag, an inflammatory symbol of a lost era of white supremacy in the south.

But the real significance of the elections is that Biden begins his term with a Democratic majority in the House and Senate.

While the Senate majority will be the narrowest possible – the party will hold 50 seats in the 100-member chamber, with incoming vice-president Kamala Harris permitted to cast a tie-breaking vote in her capacity as president of the Senate – it significantly eases Biden’s path to governance.

Democrats will be obliged to keep Democratic senators from Republican-leaning states, like Joe Manchin from West Virginia, in line. Manchin was the lone Democrat to vote for Trump’s second supreme court nominee Brett Kavanaugh, though he voted to remove Trump a year ago during the impeachment trial.

But Wednesday’s events, which saw some Republicans censure Trump’s claims of election fraud, gives hope that several Republicans are not wedded to their partisan corner and will be prepared to work with Democrats.

Biden, who still believes in bipartisanship based on the experience of his 36 years in the Senate, had been dismissed as naïve. But the shocking and destructive end to Trump’s presidency may now act as a catalyst for Republicans to work with Democrats to ensure Congress does what it is supposed to do and legislate for the American people.