America Letter: Biden urges the people to join him in his new vision of America 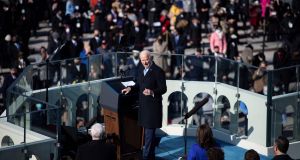 New US president Joe Biden delivering his inauguration speech after being sworn in as the 46th US president on January 20th at the US Capitol in Washington, DC. Photograph: Caroline brehman/pool/AFP via Getty Images

For a brief moment on Wednesday it seemed that it all might still go awry. As the soon-to-be president Joe Biden and his wife Jill stood on the threshold of the US Capitol balcony, the sky darkened over the brilliant white dome.

A menacing grey cloud moved in and the wind whipped up. I nestled deeper into my coat as a collective shiver ran through the socially-distanced crowd. Snow began to fall. Was this Donald Trump returning to inflict vengeance on the American people, like a modern day wicked witch of the west ready to shatter the dream of this new land of Oz?

After all, the last four years have sometimes felt like an improbable fairy-tale. Four years ago the notion that a pro-Trump mob would storm the Capitol, encouraged by a scorned president who refused to accept the outcome of a democratically-held election, would have seemed fantastical. Regrettably, by the time Trump was finished with the nation he was elected to lead, that vista not only came to pass but felt somewhat inevitable.

But January 20th was not about Donald Trump, the man who governed through division and stoked up the very carnage he had warned about at his own inauguration.

Instead it was about a new vision of America. As the military band played-in the new president, the cloud moved on and the sun broke through. A ripple of anticipation passed through the rows of guests. I craned my neck, eager to catch a glimpse of the new president, ready to hear assurances that the US was still what it had promised to be when it was founded more than 200 years ago – a land of modernity, of equality, of possibility.

As he began to speak Biden offered the reassurance that the country needed to hear. He did not shy away from the challenges, referencing in his opening sentences the riot that had occurred in the same spot where he stood. He spoke of the “exhausting outrage”, the need to “join forces, stop the shouting, and lower the temperature”.

His speech balanced moments of soaring rhetoric with everyday imagery, reflecting Biden’s ability to embrace big ideas at the same time as he connects with ordinary Americans.

That theme permeated the rest of the day. As he walked the final stretch of the route between the US treasury building and the White House, surrounded by his beaming extended family, Biden was a man at ease with the trappings of power as much as talking to regular citizens. He jogged over to fist-bump the crowd, frustratingly small for a man known to linger for hours with supporters at events.

Inside the White House he participated in a virtual swearing-in ceremony with 1,000 new federal employees. Welcoming the new team, he spoke of the importance of “honesty and decency,” noting that everyone deserved to be treated with respect.

“I’m not joking when I say this: if you ever work with me and I hear you treat another colleague with disrespect, talk down to someone, I will fire you on the spot. No ifs, ands or buts,” he said.

Later than evening millions of Americans settled in to watch the inauguration concert on television.

Just as last summer’s virtual-only Democratic National Convention served-up a moving celebration of the US’s virtues, the concert was a two-hour delight.  Some of America’s biggest stars performed, including Bruce Springsteen, Jon Bon Jovi and John Legend, who performed Nina Simone’s classic Feelin’ Good at a piano in the shadow of the Lincoln Memorial. “It’s a new dawn, it’s a new day, it’s a new life ...” he sang, capturing the mood of many in this country.

The show also featured hundreds of Americans from across the country, teachers, refuse collectors, nurses. Towards the end it cut to a live image of the Biden family watching the show together at the White House, the new president dancing with his infant grandchild as he looked on. As the new first family appeared on the balcony of the White House, residents of Washington DC rushed out of their houses to try to catch a sight of the fireworks over the National Mall.

Biden may face an upward battle as he seeks to implement his policies and unite a divided country. But for one night at least Americans took on board Biden’s advice in his inaugural address, to “look ahead in our uniquely American way – restless, bold, optimistic – and set our sights on the nation we know we can be and we must be”.