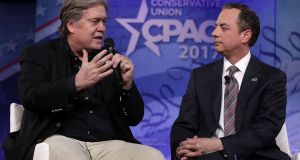 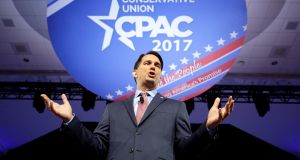 As Republican congressmen return to their home states to face many angry constituents during this week’s Congressional recess, the great and the good of the Republican Party and the conservative movement is gathering for the annual Conservative Political Action Conference (CPAC) just outside Washington DC.

The annual event is a centerpiece of the conservative calendar. Unsurprisingly, there is a spring in the step of many delegates his year as they bask in the glory of a Republican-controlled House, Senate and White House.

Last year, Ted Cruz was flavour of the month, chastising rival Donald Trump for cancelling his appearance, “So Donald Trump is skipping CPAC? I think someone told him Megyn Kelly was going to be here,” he said, referring to Trump’s clash with the Fox News anchor.

How things have changed. This year, the Trump brand of Republicanism is dominating discussion both on and off stage.

On one level, CPAC has always been about the battle for American conservatism and the soul of the Republican Party.

This year more so than others. The populist mix of nationalism and protectionism embraced by Trump and once dismissed as a fringe movement is now front and centre as the Republican Party confronts the electoral success of Donald Trump.

This conflict between competing versions of Republicanism was played out in the “conversation” between White House chief-of-staff Priebus and Trump adviser Stephen Bannon on Thursday.

As expected, both men put on a show of collegiality and mutual respect in a bid to dispel rumours of rivalry in the upper echelons of the White House.

Within minutes, Priebus tackled the uneasy relationship between the different strands of the Republican Party that has dogged the conference for years, arguing that Trump had “brought together the party and the conservative movement”.

“If the party and the conservative movement are together, they can’t be stopped,” he said. “Steve and I know this. We live it every day.”

“If you think they will give you your country back without a fight you are sadly mistaken. Every day it will be a fight and that is when I am proudest of Donald Trump.”

He warned that “the corporatist, globalist media” is “adamantly opposed to an economic nationalist agenda like Donald Trump has”.

Away from the stage, the sprawling conference centre was reminiscent of a typical Republican campaign rally – on-cue boos from the crowd at any mention of Democrats, presentations from the National Rifle Association and a plethora of conservative talk show hosts who had decamped to Maryland for the event.

Break-out sessions included panel discussions on “Millennials’ Love Affair with Bernie Sanders”, and “If Heaven has a gate, a wall and extreme vetting, why can’t America?”

Among the speakers was former Tea Party senator Jim DeMint, head of the influential Heritage Foundation, who rallied the crowd.

“Isn’t it wonderful that we will never have to hear the words President Clinton again?” he said to cheers.

Well-known conservative Ginni Thomas opened a session on the rule of law with a plea: “We’re tired of feeling scared. We’re tired of the Obama foreign policy,” she said, turning to the crowd: “Can I get an ‘Amen’?”

When Trump arrives here on Friday, he is likely to face a rapturous welcome, even from previously sceptical Republicans whose misgivings have been brushed away by the prize of unified Republican power.

But outside the cocooned reality of CPAC there were signs that other sections of American society were less comfortable with the new president.

As he lined up for lunch, a polite young Republican remarked to his server: “Bet you have never had a president at your hotel before, huh? ”

After a 10-second delay, the African-American woman replied: “I really don’t care.”