Mexico expresses ‘irritation’ over policies to US officials 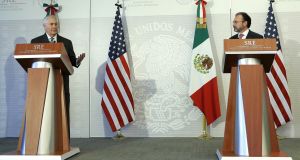 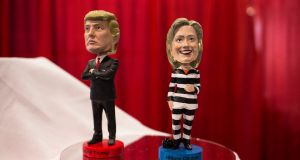 Mexico on Thursday expressed “worry and irritation” about US policies to two of president Donald Trump’s top envoys, giving a chilly reply to the new administration’s hard line on immigration, trade and security.

The US government this week angered Mexico by saying it was seeking to deport many illegal immigrants to Mexico if they entered the US from there, regardless of their nationality.

It is the latest point of friction between neighbours that have also been at odds over Mr Trump’s vow to build a wall on the border and his attempts to browbeat Mexico into giving concessions on trade.

“There exists among Mexicans worry and irritation about what are perceived to be policies that could be harmful for the national interest and for Mexicans here and abroad,” foreign minister Luis Videgaray told a news conference.

He was speaking after talks in the Mexican capital with US secretary of state Rex Tillerson and homeland security chief John Kelly, who later met with president Enrique Pena Nieto. The Mexican leader scrapped a summit meeting with Mr Trump in January as tensions rose.

Both sides on Thursday pledged further dialogue on migration, trade and security issues.

Mr Kelly and Mr Tillerson were more measured in their words than either the Mexicans or Mr Trump, who on Thursday said a military operation was being carried out to clear “bad dudes” such as gang members and drug lords from the US.

But Mr Kelly said there would be “no use of military force in immigration operations,” and “no, repeat, no” mass deportations.

Meanwhile, Mr Trump said he wants to build up the US nuclear arsenal to ensure it is at the “top of the pack,” saying the country has fallen behind in its atomic weapons capacity.

In a Reuters interview, Mr Trump also complained about Russian deployment of a cruise missile in violation of an arms control treaty and said he would raise the issue with Russian president Vladimir Putin when and if they meet.

On another front, Mr Trump said China could solve the national security challenge posed by North Korea “very easily if they want to,” ratcheting up pressure on Beijing to exert more influence to rein in Pyongyang’s increasingly bellicose actions.

Mr Trump also declared himself “very angry” at North Korea’s ballistic missile tests and said accelerating a missile defence system for US allies Japan and South Korea was among many options available.

Dozens of asylum seekers, worried about Mr Trump’s plans for cracking down on immigration, have been crossing into Canada in recent weeks, putting a strain on border communities.

Canadian officials say they are monitoring people crossing the border, but are not worried at this stage, given the number of asylum seekers is relatively small.

Mr Trudeau and Mr Trump, who met for the first time last week in Washington, also discussed a long-running dispute over Canadian exports of softwood lumber, a statement from Mr Trudeau’s office said.