‘You know there is no military solution, only a political solution,’ says Staffan de Mistura 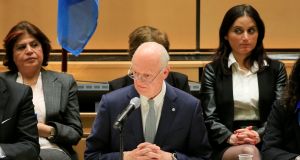 UN mediator Staffan de Mistura yesterday appealed to the Syrian government and opposition to take advantage of the historic opportunity offered by the Geneva political process to negotiate an end to six years of war. He scolded: “You know and know it well . . . the Syrian people desperately want an end to their suffering. You know there is no military solution, only a political solution.”

He argued what is “true during six years of war is true today and will be true tomorrow”.

He adopted a stern line because the ceremony welcoming the delegations, transmitted live to the UN Security Council in New York, began nearly an hour late because of squabbling between opposition groups over his insistence that they form a single delegation.

Their refusal to do so was made manifest by the adoption of separate tables for the three groups.

Jihad Makdissi, former spokesman for the Syrian foreign ministry who heads the independent Cairo platform, told The Irish Times his group’s objectives – reform and decentralisation – were at odds with the goal of the Riyadh delegation, which was the removal of president Bashar al-Assad. The Cairo and Moscow platforms have appealed to Mr de Mistura for separate but equal representation with the Riyadh delegation, while domestic Syrian opposition factions and the US-backed Kurds have been excluded.

The Riyadh-sponsored 21-member opposition high negotiation committee (HNC) delegation headed by Nasr al-Hariri, a medical doctor and activist, is divided between political dissidents and insurgent figures, led by Mohamed Alloush of the politbureau of the Saudi-supported Army of Islam. The HNC has called for face-to-face talks with government representatives.

During the four previous rounds the two sides have refused to engage directly and the UN mediator has shuttled between them. He regarded their appearance in the same room yesterday as a positive development.

Mr de Mistura praised the current, fragile ceasefire, which was brokered in December by Damascus’s ally, Russia, and opposition sponsor Turkey, saying this achievement had made possible talks on a political solution. Violence has, however, erupted near Damascus where the Syrian army is fighting insurgents in the suburbs, and in northern Idlib province where al-Qaeda’s affiliate, Jabhat Fatah al-Sham, is battling Arab- and Western-sponsored insurgents.

Turkish-supported insurgents yesterday claimed the capture of the strategic town of al-Bab, after a lengthy campaign against Islamic State.

Today, Mr de Mistura is to hold bilateral talks on procedure with the government and opposition delegations.