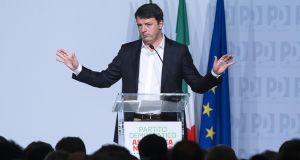 Justice minister Andrea Orlando said on Thursday he would challenge former prime minister Matteo Renzi for the leadership of Italy’s ruling Democratic Party (PD), which is in the throes of a damaging split.

Orlando (48) comes from the left wing of the centre-left party and joins Michele Emiliano, the governor of the southern Puglia region, in what is so far a three-way race with Renzi.

“I have decided to run because I believe the PD has to change deeply if it is to be truly useful to Italy,” Orlando, a former environment minister, wrote on his Facebook page.

His move is the latest development in internal battles that are tearing the PD apart just a year before a national election.

Renzi, who has been under fire from internal party critics for months, resigned as head of the PD on Sunday to pave the way for the leadership contest in which he plans to run again.

The party has been in turmoil since Renzi resigned as prime minister in December after losing a referendum on proposed constitutional reforms.

A vocal minority accuses him of an arrogant leadership style and say he has dragged the party too far to the right. They also blame him for a series of setbacks in local elections.

This week a group of leftist PD dissidents announced they were leaving to form a breakaway party which opinion polls suggest could rob the PD of 6 to 10 per cent of voting support.

“I have decided to run because I can’t resign myself to the fact that politics must be all about arrogance,” Orlando, who argues the party should do more for poor people, said in an apparent dig at Renzi.

The date of the leadership contest, which will be a primary election among PD supporters, has still not been set. Renzi wants it to be in April, but his opponents say they need more time to become better known and to organise their campaigns.

Opinion surveys among PD supporter show that if the primary were held today Renzi would easily beat all potential rivals. The PD divisions are a boost to opposition parties led by the anti-establishment 5-Star Movement, which polls say is backed by around 30 percent of Italians, roughly level with the PD.

After the PD breakaway party is formed, 5-Star will take a clear lead as the country’s most popular party, polls say.

Renzi, who is in the United States, made no immediate comment on Orlando’s decision to run. Emiliano said Orlando had “just one defect: the fact that he has been a minister in Renzi’s government.”