The Russification of America under Donald Trump is gathering pace

Putin’s macho authoritarianism, disdain for press, and mockery of truth has installed itself in Trump’s America 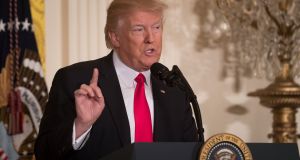 ‘Month two of this presidency needs to produce a capacity to speak with one voice.’ Above, US president Donald Trump at a news conference in the White House. Photograph: Stephen Crowley/New York Times

This Munich Security Conference was different. A Frenchman defended Nato against the US president. The Russian foreign minister was here but the phantom US secretary of state was not. An ex-Swedish prime minister had to respond to the “last-night-in-Sweden affair” – an ominous incident in a placid Scandinavian state dreamed up in his refugee delirium by Donald Trump.

Surreal hardly begins to describe the proceedings at this annual gathering, the Davos of foreign policy. This is what happens when the United States is all over the place. Allies get nervous; they don’t know what to believe. “Trump’s uncontrolled communication is unsettling the world,” John Kasich, the Republican governor of Ohio, told me. That is an understatement. The Trump doctrine is chaos.

Vice-president Mike Pence came, communicated and exited without taking questions. He said the United States would be “unwavering” in its commitment to Nato, whose glories he extolled. (He never mentioned the European Union, whose fragmentation Trump encourages.)

If a question had been allowed, it might have been: “Mr Pence, you defend Nato but your boss says it’s obsolete. So which is it?” To which the answer could well have been: “This is an administration that says everything and the contrary of everything. I advise you to get used to it – and pay up.” But getting used to a US president who responds through Twitter to the last guy in the room or what he’s just seen on TV, has no notion of or interest in European history, and has turned America’s word into junk, is not easy. Europeans are reeling.

Jean-Marc Ayrault, the French foreign minister, insisted, “We certainly cannot say that Nato is obsolete.” (For a long time the French kind of wished it was.) Wolfgang Ischinger, the chairman of the Munich conference, told Deutsche Welle that if Trump continues to advocate against the European Union it would amount to a “nonmilitary declaration of war.” Those are extraordinary words from a distinguished former German ambassador about the US president.

For me, the most troubling thing was finding myself unsure who was more credible – Pence or Sergei Lavrov, the Russian foreign minister. The Russification of America under Trump has proceeded apace. Vladimir Putin’s macho authoritarianism, disdain for the press, and mockery of the truth has installed itself on the Potomac.

Putin is only the latest exponent of what John le Carré called “the classic, timeless, all-Russian, barefaced, whopping lie” and what Joseph Conrad before him called Russian officialdom’s “almost sublime disdain for the truth.” The Russian system under Putin is a false democracy based on a Potemkin village of props – political parties, media, judiciary – that are the fig leaf covering repression or elimination of opponents. Russia runs on lies. It’s alternative-fact central (you know, there are no Russian troops in Ukraine). But what happens when the United States begins to be infected with Russian disease?

Pence’s speech may not have been precisely a barefaced whopping lie, but it certainly showed barefaced whopping disdain for the intelligence of the audience (you know, nothing has changed with Trump, ha-ha.) By comparison, Lavrov was blunt. He announced the dawn of the “post-West world order.” That became a theme. Mohammad Javad Zarif, the Iranian foreign minister, announced the “post-Western global order.”

I wonder what that means – perhaps a world of lies, repression, unreason and violence. It advances as America offers only incoherence. To counter the drift, what is needed? A functioning US state department would be a start. Right now, Rex Tillerson, the secretary of state, cuts a lonely figure, his reasonable choice of deputy nixed by Trump, his authority (if any) unclear. America today has no foreign policy. It’s veering between empty reaffirmations of old bonds (Pence) and the scattershot anti-Muslim, Sweden-syndrome, anti-trade, bellicose, what’s-in-it-for-me mercantilism of Trump.

Month two of this presidency needs to produce a capacity to speak with one voice. It was interesting to see John Kelly, the secretary of homeland security, talk about a coming revised travel ban order for seven mainly Muslim countries and say that “this time” he’d be able to work on the rollout plan. Rough translation: Last time he was cut out of the process and it was a real mess. Almost everything has been.

I’m sceptical of Trump ever running a disciplined administration. His feelings about Europe are already clear and won’t change. The European Union needs to step into the moral void by standing unequivocally for the values that must define the West: truth, facts, reason, science, tolerance, freedom, democracy and the rule of law. For now it’s unclear if the Trump administration is friend or foe in that fight.

Carl Bildt, the former Swedish prime minister, joked to me that the most terrifying aspect of Trump’s “incident” in Sweden was “the suppression of it by all the major Swedish newspapers, and even Swedish citizens.” We laughed.

The unfunny moment will come when Trump lashes out based on nothing but fervid imaginings and the “post-West” order stumbles from confusion into conflagration.

1 Former Kilkenny hurler dies after bike struck by tractor
2 Green Party’s Catherine Martin confirms she will stand against Eamon Ryan
3 Why you still can’t have a European holiday this summer. Or can you?
4 Nine more deaths from Covid-19 recorded in Ireland along with 24 new cases
5 Hundreds protest outside US embassy in Dublin over George Floyd death
Real news has value SUBSCRIBE