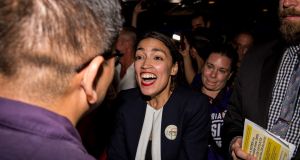 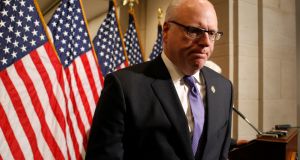 Prominent Irish-American congressman Joe Crowley has lost his primary election in New York, in a major upset for the Democratic party.

Mr Crowley, a 10-term incumbent, was widely seen as a possible successor to Nancy Pelosi as House Speaker if Democrats regained control of the House of Representatives in November. But he was sensationally beaten by 28-year-old newcomer Alexandria Ocasio-Cortez in the primary contest to pick the Democratic candidate for November’s mid-term elections in Tuesday’s primary in New York.

Ms Ocasio-Cortez, a Puerto Rican-American and Bronx-native, previously worked for Bernie Sanders and briefly for Ted Kennedy. A member of the Democratic Socialists of America, she campaigned on a strongly left-wing agenda.

Mr Crowley’s loss is a major blow to the Democratic leadership.

In a statement, 56 year-old Crowley congratulated his rival and made a plea for unity. “We will only be able to stop Donald Trump and the Republican Congress by working together, as a united Democratic Party,” he said.

Mr Trump reacted with glee to the shock result on twitter: “Wow! Big Trump Hater Congressman Joe Crowley, who many expected was going to take Nancy Pelosi’s place, just LOST his primary election. In other words, he’s out!,” he tweeted. “That is a big one that nobody saw happening. Perhaps he should have been nicer, and more respectful, to his President!”

Vermont senator Bernie Sanders congratulated Ms Ocasio-Cortez on Twitter. “She took on the entire local Democratic establishment in her district and won a very strong victory. She demonstrated once again what progressive grassroots politics can do.”

Mr Crowley’s defeat raises serious questions about the direction of the Democratic Party as it seeks to make gains in the mid-terms. The success of Ms Ocasio-Cortez suggests that the more left-wing part of the party is on the ascendant. Though seen as a liberal and a champion of progressive causes, Mr Crowley also had ties with the corporate world, connections that gave him the edge on his younger rival when it came to fundraising but may have cost him support among more liberal voters.

His defeat could suggest the waning power of the Irish-American Democratic vote in the United States. Mr Crowley represented an increasingly diverse district with a large Hispanic population.

A total of seven primary contests took place across the country on Tuesday, on both the Republican and Democratic side.

In a boost for Mr Trump, South Carolina governor Henry McMaster won his primary contest. Mr Trump travelled to the state on Monday to campaign for Mr McMaster who succeeded Nikki Haley as state governor last year after her appointment as UN ambassador. Mr McMaster, an early supporter of Mr Trump, faced a tough battle from political newcomer John Warren, but comfortably bet his rival for the nomination.

Mr Trump’s pick for the Republican nominee in Staten Island, New York, also won. Dan Donovan, who had been endorsed by Mr Trump, defeated Michael Grimm, a former congressman who had served time in prison and was hoping to make a political comeback.

In Utah, 2012 Republican presidential nominee Mitt Romney won the Republican primary race for the Senate seat. The former governor of Massachusetts has had a difficult relationship with Mr Trump, initially lambasting the billionaire property developer during the presidential campaign, but allying himself with the president more closely since his election.