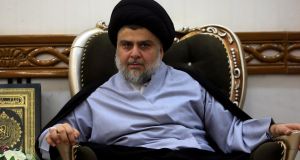 In spite of dramatic differences, the three parties that gained most votes in Iraq’s May 12th parliamentary election have agreed to work together to form a government.

The driving force of the odd alliance is radical Shia cleric Muqtada al-Sadr, an Iraqi nationalist who is both anti-US and anti-Iran. His allies are Hadi al-Amiri, head of the most powerful Iran-backed Shia militia which, with US aid, helped to defeat the Islamic State terror group in Iraq; and outgoing president Haidar al-Abadi, Washington’s choice to head the new government.

Amiri and Abadi travelled to Sadr’s home in the Shia holy city of Najaf to consecrate the unlikely alliance.

Although Sadr has been touted as the winner of the election, his party took only 54 seats, while Amiri’s won 47 and Abadi’s 42. None made a decisive showing. There were no winners, and this poll exposed the degree to which the political landscape has fractured in post-war Iraq.

The alliance gives the three blocs a combined 143 seats in the assembly, short of a 165-seat majority. The balance could be provided by the Kurdish Democratic Party, with 25 seats, or two or more of four other parties. One, headed by former prime minister Nuri al-Maliki, with 25 seats, refuses to join a coalition.

Although Abadi and the US were deeply disappointed by the result of the election, he could emerge as a compromise candidate for prime minister. Sadr cannot aspire to the post because he is not a member of parliament.

Sadr, who led two violent uprisings against the US and whose followers killed hundreds of Sunnis during inter-sectarian warfare, has projected himself as an anti-sectarian man of the people. His electoral alliance, which included communists, secularists and Sunnis, rejected all foreign intervention and promised to fight corruption, build schools and hospitals and provide for the poor.

Although in advance of the election Tehran declared it would not permit Sadr’s bloc to form a government, Sadr seems to have countered this threat by securing an alliance with the pro-Iran Amiri. Nevertheless, Maj Gen Qassem Soleimani, commander of Iran’s elite Quds force, has held talks in Baghdad to press for the establishment of a cabinet that would enjoy Iranian approval.

Success could be counted as part payback for the Trump administration’s withdrawal from the deal lifting sanctions on Iran in exchange for dismantling its nuclear programme. Soleimani is a frequent visitor to Baghdad. During the battle against Islamic State in northern Iraq, he helped direct army and militia operations.

Meanwhile the plan to hold a manual recount of all 11 million ballots has been scaled down to include only ballots where there have been formal complaints or official reports of tampering. This could speed up the official confirmation of the election results and the formation of a government.

On June 10th, an arson attack on a depot damaged ballot boxes filled with voting papers. A group of suspected of arsonists was arrested on Tuesday before they could set alight another facility where boxes had been stored.