Trump calls for illegal immigrants to be sent home immediately 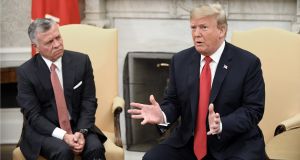 US president Donald Trump doubled-down on his zero-tolerance approach to immigration, calling for illegal immigrants who enter the United States to be sent home immediately.

A day after he called for immigrants to be deported without trial, Mr Trump said that the United States needed to reform its “obsolete” and “horrible” immigration laws.

“We want a system where when people come illegally they have to go out, a nice simple system that works,” he said in the Oval Office where he was meeting the visiting King Abdullah II of Jordan. Arguing that Mexico detains illegal immigrants for a few hours before releasing them, he said that in the United States “we have people for four or five, six years and they never leave”.

He also lambasted a proposal by Republican lawmakers last week to hire 5,000 more judges, saying it was not the solution and would lead to “graft”.

His comments in the Oval Office followed a flurry of mid-morning tweets by the president, in which he said that hiring judges was “not the way to go”.

Though the president signed an executive order halting the policy of separating children from parents detained at the border, many children remain in state care

“People must simply be stopped at the border and told they cannot come into the US illegally,” he tweeted, adding that children should be brought back to their country. “If this is done, illegal immigration will be stopped in it’s (sic) tracks ”, adding: “we must continue to BUILD THE WALL!”

Mr Trump sparked widespread controversy at the weekend by suggesting that immigrants arriving in the United States – many of whom are seeking asylum – should be sent back to their home countries without trial. It marked the latest twist in an immigration crisis that has engulfed the White House for over a week.

Though the president signed an executive order halting the policy of separating children from parents who are detained at the border, many children remain in state care across the country.

The Pentagon confirmed on Monday that it had been asked to house immigrants at its bases in Fort Bliss and Goodfellow Air Force Base in Texas, though it was unclear if these bases would house children, parents or both.

“The executive order was great. It was something that I felt we had to do. We want children staying together. The law has been this law for a long period of time,” Trump said, questioning the veracity of a report in the New York Times.

Speaking in Nevada where protestors gathered, attorney general Jeff Sessions pledged to continue to prosecute adults who enter the United States illegally, though he said the administration was going to do “everything in our power” to avoid separating families.

Meanwhile, press secretary Sarah Huckabee Sanders made her first public appearance since being ejected from a Virginia restaurant on Friday night. Addressing the controversial issue at the White House press briefing Ms Sanders said that “healthy debate on ideas and political philosophy is important but calls of harassment is unacceptable,” noting that one Hollywood actor had called for her children to be kidnapped.

Mr Trump blasted the restaurant in a tweet on Monday.

“The Red Hen Restaurant should focus more on cleaning its filthy canopies, doors and windows (badly needs a paint job) rather than refusing to serve a fine person like Sarah Huckabee Sanders,” he said. “I always had a rule, if a restaurant is dirty on the outside, it is dirty on the inside!”