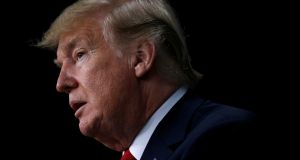 US president Donald Trump has declared that North Korea still poses an “extraordinary threat” to the United States.

In an executive order on Friday, the president extended for one year the so-called “national emergency” with respect to the nuclear-armed nation, authorising economic restrictions against it.

While expected, the declaration comes just nine days after Mr Trump tweeted “there is no longer a Nuclear Threat from North Korea” following his summit with North Korean leader Kim Jong Un in Singapore.

The order appears to undermine the president’s claim.

It states that “the existence and risk of proliferation of weapons-usable fissile material” and the actions and policies of the North Korean government “continue to pose an unusual and extraordinary threat to the national security, foreign policy, and economy of the United States”.

The national emergency has been in place since 2008 and is a sign of the enduring tensions between the US and North Korea that spiked last year as the North moved closed to perfecting a nuclear-tipped missile that could reach American soil, but ebbed with the June 12th summit where Mr Kim agreed to “complete denuclearisation” of the Korean Peninsula.

The two sides, however, still have to negotiate the terms under which the North would give up its missiles and win relief from sanctions — a goal that has eluded US administrations for a quarter of a century.

Mr Trump claimed at a Cabinet meeting on Thursday that denuclearisation had already begun, although his defence secretary James Mattis told reporters a day earlier that he was not aware that North Korea had taken any steps yet toward denuclearisation, and that detailed negotiations have not yet begun.

Meanwhile, the Pentagon said on Friday evening that it has “indefinitely suspended” a major military exercise with South Korea, known as Freedom Guard and scheduled for August, as well as two Korean Marine exchange training exercises.

Officials had announced on Monday that planning for Freedom Guard had been suspended in line with Mr Trump’s decision to halt what he called US “war games” in South Korea.

A Pentagon spokeswoman, Dana W White, said further decisions about military exercises in South Korea “in support of diplomatic negotiations” led by Secretary of State Mike Pompeo will depend on North Korea “continuing to have productive negotiations in good faith”.–PA