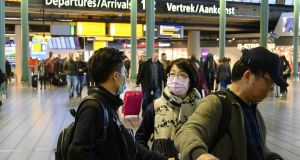 The Dutch health minister has admitted he is “shocked” at the level of anti-Asian racism being shown in response to the coronavirus – and says there are no plans to shut Amsterdam landmarks popular with Chinese tourists, as suggested by Geert Wilders’s far-right Freedom Party.

In an unusually forthright statement, which came as an online petition against racism and discrimination gathered more than 50,000 signatures in 48 hours, Bruno Bruins told MPs: “This is unacceptable. We must make absolutely certain it does not gather a head of steam.”

There has been a growing number of reports of racist behaviour aimed at “people of Asian appearance” – both Dutch citizens and tourists of different nationalities – since the virus, which originated in China, grabbed international media attention.

Chinese students in Wageningen, home to a world-renowned university of life sciences that attracts pupils from 150 countries, were targeted at the weekend when lifts in a residential block were daubed with excrement and the words “Chinese corona” and “Die Chinese”.

GreenLeft politician Corinne Ellemeet said she had heard of “numerous incidents”, including one where a number of passengers on a bus pulled their clothes up in front of their mouths when an unaccompanied young Chinese girl got on board.

The most notorious case, however, has been that of the country’s oldest nationwide commercial radio station, Radio 10, which played a parody song about the coronavirus, warning listeners to avoid Chinese food because it might be spreading the disease.

The song, called “Prevention is Better than Chinese”, included lyrics that roughly translate as, “We don’t need the virus in our country; it is caused by these (adjective deleted) Chinese” and “It will be in the fried rice soon – don’t eat Chinese food.”

The station has apologised for airing the song and has removed the video from its online channels.

The Chinese community in the Netherlands numbers about 100,000 and typically remains “invisible”, according to second-generation Dutch-Chinese newspaper columnist Peter Wu, largely because previous generations believed racism was something to be borne stoically.

Uncharacteristically, however, on this occasion 57 Chinese organisations have issued a joint statement condemning the song as racist – and organising the “We Are Not Viruses” petition in response.

“We have lived in peace and harmony in the Netherlands for more than 100 years and we have tolerated many anti-Chinese jokes – but this song has crossed the line”, said the statement.

“You don’t make jokes about an illness, a virus. Should we laugh at a song about cancer?”