AKK departure is a humiliation for Angela Merkel 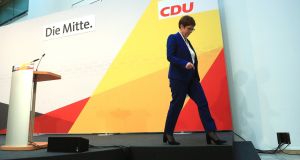 CDU leader Annegret Kramp-Karrenbauer departs following a news conference in Berlin on Monday at which she announced her decision to step down. Photograph: Krisztian Bocsi/Bloomberg

Reporters at the Christian Democratic Union (CDU) conference in December 2018 had only one concern: how to report on a new party leader with a double-barrel 24-letter eight-syllable name?

Annegret Kramp-Karrenbauer’s looming departure resolves that problem for us, but creates many more serious concerns for Germany’s dominant, centre-right party.

A transformative earthquake is underway in German politics triggered by the far-right Alternative für Deutschland (AfD). Last week, its support in the eastern state of Thuringia helped elect as premier a little known liberal politician.

That the local CDU also voted for the candidate, effectively throwing its lot in with the far-right to thwart a left-wing candidate, shattered a post-war political taboo. The consequence: first Thuringia’s CDU leader announced his resignation, followed now by Kramp-Karrenbauer.

For the AfD, it’s two heads for the price of one.

In reality, the turbulence of last week’s vote merely catalysed doubts about AKK’s authority in her party and exposed the CDU’s long-deferred decisions about its political direction.

The CDU’S two-decade Merkel era, in particular her 15 years in power, saw the party adopt a centrist course – with occasional swings left in welfare and migration politics. But is this still a winning formula or does the CDU, as a growing conservative wing in the party argues, need to follow Austria’s People’s Party (ÖVP) and shift right to halt conservative voter drift to the fringes?

That Kramp-Karrenbauer never established any authority in her party was painfully clear last week when the Thuringian CDU ignored both her and a strict party ban on AfD co-operation.

Despite lacking credibility she plans to stay on and “moderate” the transition. In the next breath she admitted on Monday that her co-habitation with Angela Merkel - splitting party chair and chancellorship - had created confusion. Why should such a job share work for her successor?

Kramp-Karrenbauer’s premature departure is a humiliation for Merkel. Securing her successor the top job was the chancellor’s last political coup. That coup has failed.

The resignation of the CDU’s second female leader after just 14 months tears up the chancellor’s plan for an orderly transition. Merkel has vowed to stay on until her fourth term as chancellor ends in the autumn of 2021. As of now, that is no longer her decision to make.