Oklahoma court rules Trump rally in Tulsa can go ahead 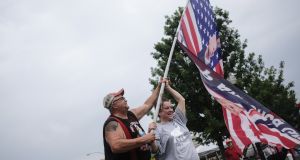 A man and woman hold a flag featuring the image of Donald Trump, in Tulsa, Oklahoma, in advance of the US president’s visit to address an election rally on Saturday. Photograph: Matthew Hatcher/Bloomberg

An election rally for US president Donald Trump will go ahead today as planned, after the Oklahoma Supreme Court rejected an appeal to cancel the event.

A group of local businesses and residents brought the lawsuit amid concerns that the event could breach coronavirus rules. But the court yesterday gave the event the go ahead.

Earlier, the Republican mayor of Tulsa rescinded a curfew that he had previously announced following a phone call with Mr Trump. The curfew, which was expected to have taken effect at 10pm, was announced due to expectations of large-scale protests.

Supporters of the president had started queuing outside the venue on Thursday, amid expectations that the event at the 19,000-capacity arena will be oversubscribed.

“Any protesters, anarchists, agitators, looters or lowlifes who are going to Oklahoma please understand, you will not be treated like you have been in New York, Seattle, or Minneapolis,” he said, referring to the recent anti-racism demonstrations in those cities. “It will be a much different scene!”

Mr Trump had already bowed to pressure and delayed the rally by a day because the original date had clashed with yesterday’s “Juneteenth” anniversary – traditionally a day when the United States celebrates the end of slavery.

This year, June 19th has taken on added significance given the widespread public protests against the killing of African-American man George Floyd in Minneapolis.

The poll also shows that most Americans disapprove of Mr Trump’s handling of the recent protests that have put the issue of race relations back on the political agenda in the United States.

The poll is the latest in a series showing Mr Biden opening a strong lead over Mr Trump, four and a half months before November’s presidential election.

Mr Biden has severely criticised his rival’s response to the pandemic and Mr Trump’s divisive rhetoric in the wake of the George Floyd protests.

Meanwhile, former presidential hopeful Amy Klobuchar has withdrawn her name for consideration for the position of vice-president if Mr Biden is elected, stating that she believes a woman of colour should be on the ticket.