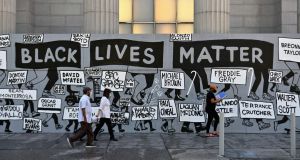 US president Donald Trump has said he would like to see an end to the police use of chokeholds, except in certain circumstances.

“I don’t like chokeholds,” Mr Trump said in an interview with Fox News that aired on Friday. “Generally speaking,” he said, the practice “should be ended”.

But Mr Trump also talked at length about a scenario in which a police officer is alone and fighting one-on-one and could have to resort to the tactic.

Chokeholds have come under renewed scrutiny in the wake of the killing of George Floyd in police custody, which has sparked mass protests across the nation and around the world demanding justice, racial equality and policing reform.

Though the tactic was not used on Mr Floyd, who died after a police officer pressed his knee into his neck, it has become a symbol of police brutality and there have been calls nationwide to ban its use.

The manoeuvre is banned in many departments across the country already.

A chokehold is a tactic in which an officer puts his or her arm around the neck of a suspect, blocking airflow.

Eric Garner died in 2014 after a police chokehold, though the officer responsible maintains he used a different, legal takedown manoeuvre called “the seatbelt”, in which an officer puts one arm around a suspect’s chest and another around the waist to wrestle a suspect to the ground.

In response to the protests, the White House has been working to craft an executive order on policing, though it is unclear if the final version will address chokeholds at all.

The White House did not immediately respond to a request for comment, and Mr Trump did not mention the tactic during a roundtable discussion in Texas on Thursday in which he discussed the order.

Representatives on the Hill have also been working to craft legislation in response.

And even as he endorsed scaling back their use, Mr Trump nonetheless sounded convinced that chokeholds were sometimes necessary, calling it a “very tricky situation” in his interview with Fox.

“Sometimes if you’re alone, and you’re fighting someone whose tough, and you get somebody in a chokehold ... What are you gonna do now? Let go and say: ‘Oh let’s start all over again? I’m not allowed to have you in a chokehold’,” he said.

“I think the concept of chokeholds sounds so innocent, so perfect. And then you, realise if it’s a one-on-one ... if a police officer is in a bad scuffle and he’s got somebody ... So you have to be very careful.”

“With that being said, it would be, I think, a very good thing that, generally speaking, it should be ended,” he added.

Congressional Democrats have introduced a Bill that would bans chokeholds and “carotid holds” at the federal level. The Justice in Policing Act would also condition law enforcement funding on state and local governments banning chokeholds, though it is unclear if that would withstand legal scrutiny.

Senate Republicans have also been working on their own package of policing changes, but it does not currently include a chokehold ban.

A private autopsy found that Mr Floyd died of asphyxiation from sustained pressure on his neck, but the city’s medical examiner found he died from heart failure in part because of the neck compression. – AP