Protests against racism and police brutality take place across the globe 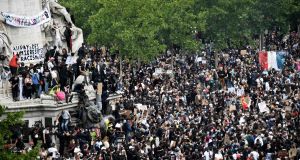 Protesters attend a rally as part of the Black Lives Matter worldwide demonstrations against racism and police brutality, on Place de la Republique in Paris on June 13th. Photograph: Anne-Christine Poujoulat/AFP via Getty

Riot police fired tear gas to prevent thousands of anti-racism protesters marching through central Paris on Saturday, as a wave of anger continued to sweep the world following the death of African American George Floyd.

The protesters gathered in Place de la Republique, where the crowd chanted “No justice, no peace” and some climbed the statue of Marianne, who personifies the French Republic. Police refused organisers permission to proceed to the Opera House.

The protest was generally peaceful but after three hours skirmishes broke out. Organisers urged protesters with children to leave as riot police charged pockets of protesters and projectiles were thrown at police lines.

The outrage generated by Floyd’s death in US city of Minneapolis last month has resonated in France, in particular in deprived city suburbs where rights groups say that accusations of brutal treatment by French police of residents of often immigrant background remain largely unaddressed.

Assa Traore, sister of 24-year-old Adama Traore, who died near Paris in 2016 after police detained him, addressed Saturday’s protest.

“The death of George Floyd has a strong echo in the death in France of my little brother,” she said. “What’s happening in the United States is happening in France. Our brothers are dying.”

Traore’s family say he was asphyxiated when three officers held him down with the weight of their bodies. Authorities say the cause of his death is unclear.

One banner carried by the crowd in the Place de la Republique read: “I hope I don’t get killed for being black today”. Another carried a message for the government: “If you sow injustice, you reap a revolt.”

His remarks drew condemnation from police unions, which said officers were being scapegoated for deep-rooted social ills. Police have held their own protests in cities across France this week.

Ahead of the protest, in the ethnically diverse Paris suburb of Belleville, one man of Algerian descent said he had been the victim of police violence but he doubted institutional racism ran through the force.

“I’ve been insulted, hit even. But the police aren’t all the same,” he told Reuters TV, identifying himself as Karim. “Unfortunately, this minority is hurting the police.”

Far-right activists unfurled a banner with the words “anti-white racism” from the rooftop of a building overlooking the protest. Residents emerged onto their balconies and ripped it up using with knives and scissors, to cheers from below.

Protests in support of the Black Lives Matter movement have gone ahead in parts of Australia, against the advice of government and health authorities but on a significantly smaller scale than last weekend, when tens of thousands rallied in cities on the east coast.

The biggest demonstration was in Perth, the Western Australia state capital, where the Australian Broadcasting Corp estimated 5,000 people gathered to honour George Floyd and remember indigenous Australian people who died in custody.

The threat of rain and and lack of a city council permit meant the Perth rally did not reach the expected 8,000-15,000 people organisers had hoped would attend.

Hannah McGlade, a human rights lawyer and activist, called for an independent investigation into indigenous deaths in custody and rejected calls from politicians for people not to gather for the protests.

Western Australia state premier Mark McGowan had urged organisers to postpone the event, saying: “This is about trying to save people’s lives.”

A man who attended the rally in Melbourne last weekend later tested positive for the coronavirus, heightening concerns about a potential second wave in Australia just as the federal and state governments are easing restrictions.

The nationwide day of protests started in the far north, with more than 1,000 people gathering at City Park in Darwin, which has the highest proportion of Aboriginal people of Australia’s state capitals.

Police in the North Territory issued a statement saying the event was peaceful “and allowed community members to express their views in a safe environment”.

Sharna Alley, one of the Darwin protest organisers, told the crowd: “We’re tired of the injustices. We’re tired of the brutality against our people in so-called protective custody. We really want to know, when will it stop.”

Aboriginal people and Torres Strait Islanders comprise 2 per cent of Australia’s adult population but 27 per cent of the prison population.

They are also the most disadvantaged ethnic minority in the country and have higher-than-average rates of infant mortality and poorer overall health, as well as shorter life expectancy and lower levels of education and employment than other Australians.

Fights broke out between rival groups and police outside London’s Waterloo station on Saturday, with missiles and fireworks thrown, a Reuters witness reported.

A huge cry of “EDL”, which stands for the far-right English Defence League, went up and then demonstrators charged towards the station before police arrived in greater numbers and cordoned off areas.

Far-right activists took to London’s streets on Saturday, vowing to protect historic monuments that have been targeted on the fringes of recent Black Lives Matter marches. They have clashed with some anti-racism groups. - Agencies