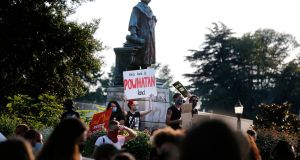 Members of the Richmond Indigenous Society stage a protest near the Christopher Columbus statue at Byrd Park, in Richmond, Virginia, US, on Tuesday. File photograph: James H Wallace/Richmond Times-Dispatch via AP

Anti-racism protesters in the US state of Virginia tore down a statue of Christopher Columbus on Tuesday night in Byrd Park in Richmond, then draped the statue in a burning flag and dumped it in a lake, images of the incident posted on social media showed.

The incident comes as a wave of demonstrations calling for racial justice has swept across the US and Europe following the death of George Floyd.

Floyd (46) died after a police officer knelt on his neck for almost nine minutes while he was held face down in a street in Minneapolis on May 25th.

Some of the civil action following his death has focused on monuments glorifying countries’ imperialist pasts. Protesters have torn down statues linked to empire and the slave trade.

Columbus was born in Genoa, Italy, in 1451 and his voyages across the Atlantic opened the way for European colonisation of the Americas. He first arrived in the Americas on October 12th, 1492, a date marked as Columbus Day in the US, where it is a federal holiday. – Reuters