UNHCR report finds 79.5m people – or one in 97 – on planet have been forcibly displaced 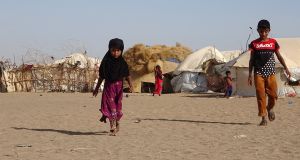 Children at a displaced persons camp in the Khokha district of Yemen’s western province of Hodeida. Photograph: Khaled Ziad/AFP via Getty Images

One in 97 people on Earth have now been forcibly displaced, according to the latest annual UN Refugee Agency global trends report, which says that 79.5 million people are now affected.

“We are witnessing a changed reality in that forced displacement nowadays is not only vastly more widespread but is simply no longer a short-term and temporary phenomenon,” UNHCR head Filippo Grandi said, ahead of World Refugee Day on Saturday. “People cannot be expected to live in a state of upheaval for years on end, without a chance of going home, nor a hope of building a future where they are.”

Some 85 per cent of refugees are in developing countries, the report says, while two-thirds of refugees displaced across borders come from just five countries: Syria, South Sudan, Myanmar, Venezuela and Afghanistan.

One of the long-term solutions available to a small percentage of vulnerable refugees is resettlement to a new country, but the pandemic put this on hold.

In 2019, more than 63,000 refugees were resettled to countries including Germany, Canada, Australia and the USA. Nearly 10,000 more departed by March this year.

On Thursday, the agency announced it will resume departures again, although many transport restrictions remain in place.

The pandemic left tens of thousands of waiting refugees not knowing when they might move, while new arrivals got used to life in a place that was far from what they had imagined given the unprecedented lockdowns and restrictions.

For Dawit, an Eritrean who was resettled to Manchester, in the UK, late last year, it was a new experience to be able to buy a lot of supplies during a crisis.

“Some people are scared and stay home,” he said in March, sending a video of a man stockpiling food. “Most people are doing like this. Even me, I started collecting everything like any person. Most supermarkets are gone empty, people started storing everything at home.”

Since then, he has kept busy, doing online language classes and advising other more recently arrived refugees struggling to adjust to British systems amid the pandemic. Without fluent English, they were afraid to visit supermarkets and worried that their children would touch things and they would be blamed.

“I received many calls from these mothers asking me to help them,” he said.

One of the last people to be resettled before the shutdown was Teklia, an Eritrean who came to Sweden with his sister. The two had spent years between smugglers and government detention centres in Libya, and months in a transit camp in Rwanda.

“It’s danger time but God keeps us well,” he told The Irish Times, explaining he wasn’t worried about coronavirus. “It’s [an] easy disease. I know tuberculosis is much more dangerous than this. I was scared more about Libyan detention.”