Israel plan for West Bank a ‘vision of 21st-century apartheid’ 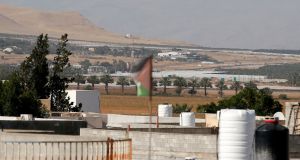 A Palestinian national flag flies over buildings in the village of Fasayil, facing farms in the Jewish settlement of Tomer, in the Jordan valley. Photograph: Jaafar Ashtiyeh

Human rights experts have urged the world community to reject Israel’s plan to annex one-third of the occupied West Bank and condemned United States support for the policy. This involves the extension, beginning in July, of Israeli sovereignty over the Jordan Valley and more than 230 Israeli West Bank settlements.

In a joint statement, the 47 experts called the plan a “vision of 21st-century apartheid” and accused Israel of seeking to create a “Palestinian Bantustan”, modelled on black autonomous enclaves established by the white South African apartheid regime.

This would render impossible the emergence of a viable Palestinian state envisaged by the internationally accepted “two-state solution”.

“The annexation of occupied territory is a serious violation of the Charter of the United Nations and the Geneva Conventions, and contrary to the fundamental rule affirmed many times by the United Nations Security Council and General Assembly that the acquisition of territory by war or force is inadmissible,” they stated.

They said the UN has repeatedly stated that the “53-year-old Israeli occupation is the source of profound human rights violations”, including land expropriations, settler attacks, home demolitions and excessive use of force. Israel, they added, has created “a two-tier system of disparate political, legal, social, cultural and economic rights based on ethnicity and nationality”.

Such violations “would only intensify after annexation”. The experts are independent rights investigators reporting to the UN.

Under the Trump administration’s peace proposal drawn up in consultation with Israel, disconnected Palestinian cantons surrounded by territory held by Israel in the remaining 70 per cent of the West Bank could join Gaza to form a Palestinian state, if Palestinians met stringent conditions.

The West Bank Palestinian Authority and Gaza’s Hamas rulers have rejected both the Trump plan and annexation. The authority has responded by cutting contacts and security co-operation with Israel. This amounts to an abrupt change in policy by Palestinian president Mahmoud Abbas, who repeatedly threatened to adopt such a risky stand but failed to follow through on earlier occasions.

The authority has refused to accept $222 million a month in tax and tariff revenues collected on its behalf by Israel in accordance with the Oslo accords. Since the sum amounts to 60 per cent of the authority’s budget, civil servants’ salaries have already been cut and the Palestinian economy is expected to shrink by 11 per cent this year, partly due to the costs of containing Covid-19.

Palestinian security agencies have halted direct consultations and co-ordination with Israel and instead communicate indirectly via the Red Cross to prevent friction with Israeli soldiers and settlers, as well as Palestinian attacks against Israel. The agencies have begun digitalising and destroying paper files as Israel has repeatedly seized sensitive Palestinian material in raids.