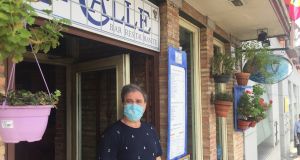 José Manuel Rodríguez, owner of La Calle bar in Toledo. “We may have moved from one phase to another, but the amount of activity hasn’t increased.” Photograph: Guy Hedgecoe

La Calle is a small bar just round the corner from Toledo’s central Zocodover square. It’s a premium location when it comes to drawing customers in this tourism-reliant city, which is perched on a hill in the plains of Castilla-La Mancha in central Spain.

But right now the owner and manager, José Manuel Rodríguez, is far from busy. There is only one client in the bar, which he reopened just a few days ago. Although Toledo, like most of Spain, is now in the third and final phase of the return to normal activity after a three-month lockdown, the tourists, both Spanish and foreign, have yet to arrive.

“It’s difficult here in Toledo because we live off tourism,” Rodríguez says, sitting at a table at the back of the bar.

“It doesn’t matter how many phases we get through, we need people to start coming to visit again. We may have moved from one phase to another, but the amount of activity hasn’t increased.”

La Calle is one of the very few establishments in Toledo’s historic centre which has reopened. The owners of most others prefer not to take on the costs of paying staff and other overheads until the tourists have returned.

On Sunday, Spain will lift the state of emergency which has been in place since the coronavirus crisis began in March, meaning a return to the “new normal”.

It will also mean opening up to international tourism again, allowing citizens of most EU countries to enter without having to undergo the two-week quarantine which has been in place for foreign visitors.

In recent days a bilateral agreement has been allowing around 11,000 German tourists to visit the Balearic Islands, which have been relatively lightly affected by the pandemic.

These are significant steps for a country whose tourism industry makes up around 12 per cent of GDP, and which normally expects 80 million foreign visitors each year.

“We have plenty of reasons to support this sector, which is no different to supporting the country as a whole,” said prime minister Pedro Sánchez, as he unveiled a €4.2 billion plan to jump-start the tourism industry this week.

In Toledo the many shops selling replica swords and pen-knives made out of the city’s famed steel are shut, as are most other souvenir shops. In Zocodover square some face-masked locals buy newspapers or stand and chat while observing social distancing.

Even with the country’s borders reopened it could be some time before the tourism industry returns to anything like normal.

“We’re not desperate to reopen at all,” says Pedro Morón, owner of Los Cigarrales, a two-star hotel on the edge of Toledo, which is planning to open again in early July.

“Initially we had thought about not opening until March of next year because of the situation,” he adds, speaking in the hotel’s empty lobby. “But you have to take decisions and you have to keep fighting.”

Morón is expecting only 15 per cent of the usual revenue during this summer, and admits that he is only reopening the hotel in order to get himself and his staff out of their homes.

“It’s more about emotional and personal stability than economics,” he says. “In economic terms the most intelligent thing would probably be to reopen next March.”

The staff at Los Cigarrales are taking a course in health safety and implementing a series of measures to ensure that the hotel is safe. Rooms will be disinfected after customers leave, social distancing will be maintained, and glass screens and hand gel dispensers are being installed at reception.

At Hierbabuena, one of the few restaurants in the city which have opened, such measures are already in place. Customers are offered hand gel and foot spray on arrival, and waiters wear face masks as they attend the sparsely spread tables.

Few places in Spain are as reliant on tourism as Toledo, but the industry as a whole appears to be playing down expectations ahead of what is going to be an atypical summer.

“The national demand is not going to be enough to cover the lack of international tourists,” says Emilio Gallego, secretary general of Hosteleria de España, a national tourism association. “Of course we’re going to have the worst season for years.”