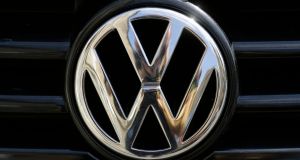 US threat of a 25 per cent tariff on European-produced cars is the biggest worry for the continent’s carmakers in 2019. PHotograph: Markus Schreiber/AP Photo

Volkswagen chief executive Herbert Diess has warned import tariffs from the US could cost the German carmaker billions of euro each year.

Mr Diess said the US threat of a 25 per cent tariff on European-produced cars is the biggest worry for the continent’s carmakers in 2019. German chancellor Angela Merkel has already called Donald Trump’s threat of tariffs “frightening”.

Mr Diess, in an interview at the headquarters of the world’s biggest selling carmaker in Wolfsburg, Germany, said concerns over the imposition of the tariffs had helped to create “political instability”.

“It’s becoming tense once again,” Mr Diess told the Financial Times. “You know it’s a pity because we can’t solve it from the car industry [alone]. It’s more of a tariffs negotiation between Europe and the United States.”

London-based Evercore ISI said the tariffs would cost Volkswagen €2.5 billion a year – or 13 per cent of its expected earnings.

“In the worst-case situation, that would probably be close to the real figure,” Mr Diess said of the Evercore projection.

Concerns over Brexit, with the deadline for Britain leaving the EU just over a month away and a deal still to be finalised, had also helped to create political instability, but on a smaller scale, Mr Diess added.

US commerce secretary Wilbur Ross this week submitted recommendations to Mr Trump on whether imported vehicles pose a national security threat. The president has 90 days to act on the findings, which have not been revealed and were drawn up after the launch of an investigation under section 232 of the US Trade Expansion Act.

The president said on Wednesday that car tariffs were “something we think about”, as he hosted Austrian chancellor Sebastian Kurz at the White House. He added that the levies would be a possible response if “we don’t make the deal” on trade with the EU.

Mr Diess travelled to Washington in December with Daimler chief executive Dieter Zetsche to lobby against protectionist policies. He said the meeting went well, but negotiations have soured since and he has little power to change the situation.

The European Automobile Manufacturers Association said this week it had “grave concerns” about the US using section 232 for tariffs on European-produced cars.

“All manufacturers have embraced a global supply chain model,” said the association’s secretary-general Erik Jonnaert in an interview. “Once you start to interfere with that by imposing tariffs, or quotas – interfering with free movement of parts, components and finished products – you hit all manufacturers.”

Mr Jonnaert warned the tariffs would cause unknown “ripple effects” in addition to hurting both European carmakers and the US economy.

General Motors and Ford have also said that commodity costs, resulting in part from Mr Trump’s steel and aluminium tariffs, would be $1bn higher in 2019.

On Brexit, Mr Diess said: “Even on a hard Brexit, I would say, sales would not stop - but they would decline a lot. We would have a lot of friction . . . We have Bentley producing there [in Britain]. They would probably struggle to export to the EU. So you can work on the worst-case scenario, but we think the risks will be lower.” – Copyright The Financial Times Limited 2019

1 How I managed to cut my mobile phone bill by at least a half
2 Ireland must beware as digital tax reform enters critical phase
3 Fiona Reddan: Who’s afraid of Revolut? Not AIB and BOI it seems
4 State may face €1 billion in compensation in Covid-19 case, Press Up group claims
5 Son putting elderly dad under pressure to sign over land
6 Is Coveney the right man to lead Greencore out of the Covid-19 crisis?
7 Lahinch Golf Club runs out of its own cash after €3m Covid-19 hit
8 Reopening businesses can claim ‘restart week’ payment
9 French move highlights dangers for Ireland in brewing tax war
10 iPhone 12 Pro Max review: A must-have if you like big phones
Real news has value SUBSCRIBE

Hospitality compensation claim, smart homes and SIMple pleasures 06:40
Is Coveney the right man to lead Greencore out of the Covid-19 crisis? 06:00
State may face €1 billion in compensation in Covid-19 case, Press Up group claims 06:00
Keep an eye on your heart with the Withings BPM Core 05:44
Take gaming to a new level this Christmas 05:43
Search executive
jobs on irishtimes.com