Democrats in bid to kill off Trump’s emergency declaration 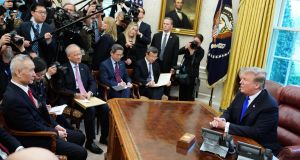 US president Donald Trump takes part in a meeting with China’s vice-premier Liu He in the Oval Office of the White House. Photograph: Mandel Ngan/AFP/Getty Images

Democrats will seek to block US president Donald Trump’s attempt to build a wall on the Mexican border when they vote on overturning his emergency declaration on immigration next week.

Congress, which has been in recess this week, will vote on a resolution in the House of Representatives that seeks to terminate the controversial presidential declaration next Tuesday.

Mr Trump broke with presidential precedent by declaring a national emergency two weeks ago over immigration, a move that may allow him to source funding for his proposed border wall with Mexico from federal departments without authorisation from Congress.

The move has set up a potential constitutional crisis between the executive and legislative branches of government. Democrats in Congress have denounced the move as unconstitutional, arguing that only Congress has the authority to appropriate funds.

House speaker Nancy Pelosi confirmed on Friday that a resolution had been introduced and would be put to a vote on Tuesday.

“The president clearly violates Congress’s exclusive power of the purse, and this power is preserved by the text of the constitution,” she said. “This isn’t about anything partisan or political. This is about upholding the oath of office to protect and uphold the constitution.”

Texas Democratic congressman Joaquin Castro, who authored the one-page resolution calling for the emergency declaration to be terminated, said it already had the support of 226 members of Congress.

But only one Republican has endorsed it so far: Michigan congressman Justin Amash. The resolution’s passage is assured in the House, but support in the Senate is less so, as Republicans hold a majority there. Nonetheless, several Republicans have publicly expressed disapproval of the president’s move to declare a national emergency over immigration. Mr Castro called the move by Mr Trump as a “historic power grab”.

“The president is declaring a national emergency to fulfil a campaign promise, not because there is an actual emergency on the United States border,” he said. “It will require historic unity by members of Congress, Republican and Democrat, liberal and conservative, to counteract the president’s parasitic movement.”

Mr Trump has extended a March 1st deadline given to China to make trade concessions in order to prevent new tariffs from taking effect. Speaking in the Oval Office, where he hosted Chinese vice-premier Liu He, who is in Washington for high-level trade negotiations, Mr Trump said discussions were going well and would continue through the weekend.

At his last meeting with Chinese leader Xi Jin ping in Buenos Aires in December, Mr Trump threatened to increase tariffs on $200 billion of Chinese goods from 10 per cent to 25 per cent on March 1st if a deal was not agreed. But on Friday he said negotiations were going well and the deadline would be extended.

“It’s very likely that a deal will happen,” the president said, raising the prospect of hosting the Chinese leader at his home in Mar-a-Lago, Florida, next month when the “finer details” of a deal would be worked out.

China and the United States have been locked in an escalating trade war that threatens to destabilise the global economy. Trade representative Robert Lighthizer, who along with Chinese central bank governor Yi Gang was present at the Oval Office meeting, said progress had been made related to structural issues in the Chinese economy. But he stressed there were still major hurdles to clear.

There were reports this week that China had agreed to buy hundreds of billions worth of extra agricultural products from the US as part of the negotiations. But Washington is also urging Beijing to address what it says is unfair intellectual property practices. Treasury secretary Steve Mnuchin also suggested that some form of agreement had been reached on currency stabilisation, though declined to give specific details.