Trump is copying Obama when it comes to his Asia policy

Janan Ganesh: A pivot by the US towards Asian nations has long been in the works 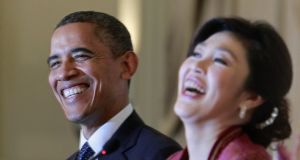 Looking back, “pivot” was always a silly word for the transfer of American attention to Asia. Minted by Barack Obama’s administration almost a decade ago, it implied athletic speed, when so epic a process can only ever be slow, fitful and liable to interruption by events elsewhere.

Once those events struck – the Russia-Ukraine war, the meltdown of Syria – any turn to the Pacific would have been eccentric to the point of callousness. Towards the end of his presidency, Obama was barely pretending to look much farther east than Kabul.

He is probably too discreet an ex-president to divulge them in full, but his thoughts on international news these days would be worth any speaking fee. This week, America and China are negotiating over trade after two years of confrontation. Next week, US president Donald Trump will meet North Korea’s Kim Jong-un in Hanoi for their second summit in nine months.

In January, Trump signed off on extra resources for the US presence in east and southeast Asia. In among these events, the administration showed lordly indifference to Europe at last weekend’s Munich Security Conference – a sort of martial Davos – and floated a military drawdown in the Middle East.

Taken together, what these isolated happenings appear to constitute is that promised pivot, or, to go with the word Obama came to favour, a rebalance. It is hard to credit because no successive presidents have been less philosophically alike since at least Herbert Hoover and Franklin Roosevelt, but Trump is running with one of his predecessor’s defining ideas. And it happens to be the idea of greatest consequence to the world.

In fact, historians might come to regard the US in 2019 as being three presidencies into an attempted Asian tilt, not just two. It was under George W Bush that America agreed the Trans-Pacific Partnership (which Trump nixed, in perhaps his strangest foreign act) and civil nuclear co-operation with India. Had the 9/11 attacks not happened, Bush’s early skirmishes with China, which he designated a “competitor”, not a “partner”, might have set the pattern for his presidency.

To put it another way, US foreign policy, such a picture of confusion since the end of the cold war, has been more consistent than we realise. There is an unmistakable trend towards Asia, at least in intent, and more recently in action. Unignorable distractions stopped Trump’s predecessors taking it further. Kinder circumstances have freed him to make up for lost time.

Because a pivot to somewhere must be a pivot from somewhere else, US allies in Europe and the Middle East feel the snub. Their mistake is to interpret it as one man’s caprice, rather than as a structural inevitability. Neglect of Nato and exasperation with the Middle East’s forever wars will come to be seen as unavoidable stages in Washington’s natural turn to Asia.

What makes these actions seem like heresies, apart from the crassness with which Trump performs them, is recency bias. Almost everyone currently living has only ever known the tight entwinement of the US, Europe and the Middle East. And so we treat this triangular bond as an eternal fixture of the world, not an improvisation born of dire contingencies in the middle of the previous century.

Trump’s successor will almost certainly be more polite to these forsaken allies. But the underlying reorientation to Asia cannot but continue. The gravitational pull of the world’s largest continent on a nation with a Pacific coast is irresistible. And this is without reckoning for the growing share of Asian-Americans in the US population. The demographic trend is not certain to give Washington a more Asia-centric cast of mind over time, but it would be odd if there was no effect at all.

American involvement in Asia is too often written up as a 21st-century trend. US forces were in Sumatra and the Philippines before they were ever in Normandy and the Gulf. Outside the World Wars (the second of which, for the US, began and ended in Asia), the deadliest external conflicts in American history were in Korea and Vietnam. Obama was the “first Pacific president” by background and rhetoric, certainly, but not by policy. The pivot to Asia is a pivot back to Asia.

What we are living through are the transitional costs of that process: the bruised friendships, the queasy sense of flux. But it would be far stranger if it were not happening at all. Obama’s roundly mocked, badly worded vision has turned out to be the way of the future, after all. His curse is to watch another president prove as much. – Copyright The Financial Times Limited 2019