Little clarity around expectations as Trump poised to meet Kim 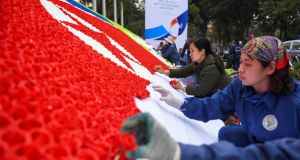 Workers make a North Korean and US flag with paper flowers in Hanoi as US president Donald Trump gets set to meet North Korean leader Kim Jong-un. Photograph: Jewel Samad

US president Donald Trump left Washington on Monday for Hanoi ahead of his second meeting with North Korean leader Kim Jong-un. The two-day summit, which begins on Wednesday, comes eight months after Trump made history by holding the first encounter between a sitting US president and the leader of the Democratic People’s Republic of Korea (DPRK) since fighting ended in the Korean War.

Even before the meeting began, the gulf between the two leaders and the respective economic health of their countries was evident. While Trump left Joint Base Andrews on Air Force One, the North Korean leader had already departed Pyongyang two days earlier on his official train, beginning a laborious route south through China to the south of Vietnam. From there he will make the remaining 170km journey by road.

The unlikely rapprochement between the two men has been one of the unexpected twists of the Trump presidency. Having traded public insults over the summer of 2017 when the newly elected US president dubbed Kim “little Rocket Man” and Pyongyang ramped up its nuclear testing, the two met for the first time last June.

Since that meeting, Trump has described their relationship in gushing terms. “He wrote me beautiful letters and we fell in love,” he said at one campaign rally.

In the run-up to the summit, the White House has highlighted the progress made with North Korea since Trump took office. Senior officials note that Pyongyang has not conducted a nuclear weapons or missile test in more than 400 days and that repatriations have begun of the remains of America soldiers killed in the Korean War. They also point to the release last year of American hostages ahead of the first Trump-Kim summit.

Trump himself struck an optimistic note on Monday as he prepared to leave Washington. “I think we’ll have a very tremendous summit,” he said.

But myriad questions present themselves, mostly around US objectives for the meeting and what precisely constitutes “denuclearisation”.

The communiqué issued by the two leaders following the June 12th summit last year spoke of the North Korean leader’s “firm and unwavering commitment to complete denuclearisation of the Korean Peninsula”. On landing back in the United States, Trump went so far as to say that “there is no longer a nuclear threat from North Korea”.

But many senior members of his administration disagree. Secretary of state Mike Pompeo, who is accompanying the president to Vietnam, said on Sunday that North Korea still poses a nuclear threat. His warnings were echoed by the US special envoy to North Korea, Stephen Biegun, who said recently the two sides still did not have an agreed definition of the term “denuclearisation”.

Pushed on the issue in the weekend interview, Pompeo said the US wanted to ensure that Kim took “demonstrable” steps toward denuclearisation. But Trump’s repeated suggestions in recent days that he is in no rush to see denuclearisation have also prompted fears that he is prepared to accept minimal concessions from Pyongyang in order to claim a deal.

In particular, speculation is mounting about any possible sanction relief for North Korea.

Trump said last week that Pyongyang must take meaningful steps in order for sanctions to be lifted, though he appeared to dangle the possibility of easing sanctions by repeatedly highlighting North Korea’s economic potential.

“I haven’t taken sanctions off,” he told reporters at the White House. “I’d love to be able to, but in order to do that, we have to do something that’s meaningful on the other side.” What this “meaningful” step would have to be is a key question going into this summit. Other unknowns are the future of US joint military drills with South Korea, as well as a possible peace declaration announcing the official end of the Korean War.

Trump’s motives in his approach to the summit are the subject of speculation, with cynics noting that he badly needs a policy win at a time when he is still feeling the political heat of his ill-advised decision to allow a government shutdown. His trip to Vietnam coincides with a big week for the various investigations into his dealings with Russia, amid reports that the Mueller investigation is nearing an end.

As the US president meets with Kim, his former lawyer Michael Cohen will testify publicly before the House of Representatives oversight committee, where he is expected to be cross-examined about hush money paid to women on behalf of his former boss and his knowledge of a proposed business project by the Trump Organisation in Moscow in the months preceding the 2016 presidential election.

With the US president under pressure at home, he may be willing to strike a deal, whatever the detail. With North Korea still in possession of nuclear arsenal, it could prove to be a dangerous miscalculation.