US Vice President Mike Pence played down reports of overcrowding and unsanitary conditions at migrant detention centres in Texas that he visited. Video shows nearly 400 men crammed inside a cage with no space to lie down in one of the centres. 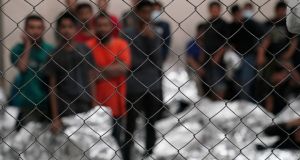 US vice president Mike Pence played down reports of overcrowding and unsanitary conditions at two migrant detention centres in Texas that he visited on Friday, but he acknowledged the gravity of the humanitarian crisis unfolding along the United States’s southwestern border.

The tour gave journalists covering the vice president a rare glimpse inside a Border Patrol station near McAllen, Texas, where they observed nearly 400 men crammed inside a cage with no space to lie down and no mats or pillows, according to pool reports.

Before members of the news media were ushered out of the facility, some of the detainees shouted that they had been there for more than 40 days, were hungry and could not brush their teeth. One pool reporter described the stench as “horrendous” - some of the agents wore face masks - and said it was sweltering inside the detention centre, which is less than 10 miles from the Rio Grande, the river that divides the United States and Mexico.

“I was not surprised by what I saw,” Mr Pence said later at a news conference. “I knew we would see a system that was overwhelmed. This is tough stuff.”

Mr Pence was effusive in his praise of Border Patrol agents, whom he referred to as “compassionate.” But instead of tamping down criticism of the Trump administration’s handling of the tide of refugees, many from Honduras, Guatemala and El Salvador, the photos and videos that emerged from the tightly choreographed tour further inflamed critics.

The visit came 10 days after the release of a scathing report by the independent watchdog arm of the Department of Homeland Security on the poor conditions at migrant holding centres near the border. More than a dozen adult detainees have died while in custody of Immigration and Customs Enforcement since the beginning of last year, according to the American Immigration Lawyers Association.

The same day Mr Pence visited the border, thousands of demonstrators across the United States held protests and candlelight vigils to express their opposition to the White House’s immigration policy. In Aurora, Colorado, protesters raised a Mexican flag in front of a local detention centre.

“It’s apparent that @realDonaldTrump & @VP have very different definitions of humane and compassionate than the rest of us,” Sen. Mazie Hirono, D-Hawaii, said on Twitter. “Let’s be clear: crowding hundreds of people in cages in sweltering heat without showers or basic necessities is neither humane nor compassionate.”

At the news conference, Mr Pence tried to deflect the criticism to Democrats in Congress, calling on them to provide additional funding for more beds for the unauthorised immigrants detained by US Immigration and Custom Enforcement (ICE). He also sought to highlight his role in a $4.6 billion emergency spending bill that tries to address the border crisis; it was approved by Congress last month and signed by President Donald Trump on July 1st.

Michael Banks, the patrol agent in charge of the McAllen detention centre, said in a news media briefing that the migrants had been provided three meals a day by local restaurants, along with juice and crackers. Because of space limitations, he said, male detainees cannot have cots, but they had been given mylar blankets that look like aluminium foil. Crinkling sounds from the blankets could be heard by journalists, who were allowed inside the facility for about 90 seconds.

Earlier on Friday, Pence visited a cavernous detention centre in Donna, Texas, that can accommodate up to 1,000 people. It was built in May and houses about 800 migrants, according to pool reports. The vice president was accompanied by the second lady, Karen Pence, and three Republican senators: Lindsey Graham of South Carolina, John Cornyn of Texas and Mike Lee of Utah. Lee helped interpret for Pence, who had asked several migrant children questions in English, according to a pool reporter.

When Pence asked the children if they had food and were being taken care of, they nodded and a few said “sí,” according to the pool report. But when he inquired if they had a place to “get cleaned up,” the children shook their heads.

Two children told Mr Pence that they had walked for two to three months to reach the United States. He then said “God bless you” in English and “gracias,” according to the pool report.

Several Democratic presidential candidates criticised Mr Pence’s appearance at the detention centres. Among them was Julián Castro, the former San Antonio mayor and a secretary of housing and urban development under President Barack Obama.

“Make no mistake, @VP, this is the result of your administration slashing aid to Central America and undermining the asylum process,” Mr Castro said on Twitter on Saturday. “You and Donald Trump share the blame.”

On Friday, Mr Pence excoriated one of Mr Trump’s favourite targets, CNN, calling its coverage of his visit to the detention centres “dishonest.”

“And while we hear some Democrats in Washington, DC, referring to US Customs and Border facilities as ‘concentration camps,’ what we saw today was a facility that is providing care that every American would be proud of,” he said, according to a transcript of his remarks in McAllen. - New York Times