Despite drop in tenancies, 2018 revenue exceeded expenses by wide margin 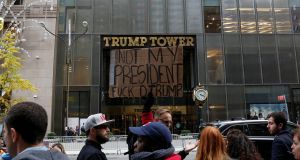 Commercial occupancy at Trump Tower, the Manhattan landmark home to the US president and his namesake real estate company, has fallen to 84 per cent from close to 100 per cent in 2013, according to data compiled by Bloomberg.

While the lease for the largest tenant, Gucci America with 48,667sq feet, does not expire until 2026, about 90,000sq feet – or 37 per cent of the skyscraper’s commercial space – is up for renewal over the next 12 months, the data show.

Gucci is followed by the Trump Corporation and Marc Fisher, with 35,893 and 33,359sq feet, respectively.

The percentage of commercial leases expiring between one and four years is less than 10 per cent, and the majority expires in more than four years. The building has a net 244,482 rentable square feet.

Despite the drop in occupancy, 2018 revenue exceeded expenses by a wide margin. – Bloomberg