About 2,000 families expected to be targeted in 10 cities as Donald Trump confirms raids from Sunday 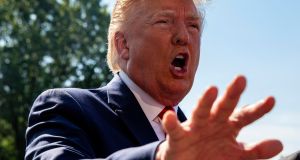 President Donald Trump speaking on Friday: “People come into our country illegally, we’re taking them out legally – very simple. It’s not something I like doing,” he said. Photograph: Samuel Corum/The New York Times

Speaking as he left the White House for Wisconsin on Friday, Mr Trump announced that raids by the Immigration and Customs Enforcement (ICE) agency would be taking place.

“People come into our country illegally, we’re taking them out legally – very simple. It’s not something I like doing,” he said.

About 2,000 immigrant families are expected to be targeted in 10 cities across the country. It is expected that the raids will focus on recently-arrived immigrants from the Mexican border area, and those who have missed court appearances.

A spokeswoman for the Irish embassy in Washington said that the embassy is available to extend consular assistance if needed. “We understand the concerns of Irish citizens in the US and their families at home in the light of reported developments,” she said.

“These issues are a matter for the US authorities but the Irish Embassy in Washington DC and consulates across the US are, as always, available to extend consular assistance,” the spokeswoman said, adding that those with concerns should contact their local embassy, consulate or immigration centre.

This weekend’s operation will take place after Mr Trump postponed a similar raid last month, on the back of interventions by members of Congress.

Confirming earlier today that the deportation measures would go ahead, he said the focus will be on those accused of criminal activity, though he did not rule out that other undocumented residents could be deported.

“We’re really looking for criminals as much as we can. Trying to find the criminal population, which has been coming into this country the last 10 years,” he said. He also lashed out at city mayors, such as New York’s Bill de Blasio, who oppose the administration’s measures, claiming that many mayors welcomed the clampdown.

Democrats and immigrant rights groups have been urging undocumented migrants to be vigilant, with House speaker Nancy Pelosi encouraging Democratic members of Congress to communicate to their constituents about their rights as immigrants. “Families belong together,” she said. “Every person in America has rights.”

Mr Trump also criticised Democrats for their immigration policy, highlighting in particular the visa lottery system which is used by citizens across the world, including Irish nationals, to live legally in the United States. “It’s a disaster,” he said. “A lottery? The Democrats have caused tremendous problems.”

In a lengthy media appearance on the White House lawn before his departure, the president also criticised Democratic members of Congress who visited border detention facilities in Texas last week and spoke of dire conditions there, describing news reports of the conditions as “phoney”.

He went on to reiterate his intention to build a wall on the southern border, a key promise of his 2016 campaign. “The wall is being built,” he said. He is expected to make immigration a centre-piece of his campaign for re-election as president next year.

The president was speaking a day after he backed down from a promise to put a question on citizenship on the 2020 census form, a politically explosive issue given that most census forms have not included the question since 1950. Instead he has ordered all federal agencies to provide the census bureau with information on citizenship.

“We are not backing down on our effort to determine the citizenship status of the United States population,” he said as he announced the measure late on Thursday.

He also expressed hopes that the citizenship information would help states who want to redraw political districts based upon those eligible to vote rather than the population at large – something that Democrats suspect will benefit Republicans, given that most foreign citizens in the United States are non-white and vote Democrat.

“Paul Ryan was not a talent. He was no leader,” he said. “The only success Paul Ryan had was the time he was with me.”