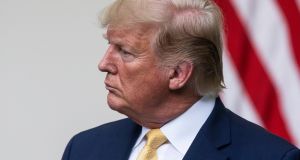 US president Donald Trump announcing his census climbdown in the Rose Garden of the White House. Photograph: EPA

US president Donald Trump said he has abandoned a plan to add a question about citizenship to the decennial census after a defeat at the supreme court, and will instead order government agencies to help the commerce department count the number of non-citizens in the country.

“We must have a reliable count of how many citizens, non-citizens and illegal aliens are in our country,” Mr Trump said in a statement at the White House. Adding the question to the census was “delayed by meritless litigation”, he said, accusing Democrats of attempting to “conceal the number of illegal aliens in our midst”.

Instead of pursuing the matter further in court, Mr Trump said he would direct every federal agency to provide records on the population’s citizenship status to the commerce department.

Cities, counties, states and immigrant-rights groups have challenged the Trump administration’s effort to add a citizenship question to the census, fearing that the query could scare off immigrants and non-citizens from responding to the once-a-decade questionnaire.

That would dilute the political power of areas home to many such people, as the results of the census are used to redraw congressional districts and allocate billions of dollars in federal spending.

Mr Trump’s political opponents say that’s the point, accusing the president of trying to use the census to bolster the political power of white voters and the Republican Party.

“They want to make sure that people, certain people, are counted,” Ms Pelosi said at a press conference on election security. “It’s really disgraceful and it’s not what our founders had in mind.”

Ms Pelosi said the goal of the Trump administration is “self-evident” to have “a chilling effect” on the response to the census.

Mr Trump announced Thursday’s news conference – which didn’t appear on his official schedule for Thursday – in a tweet previewing a social media summit at the White House.

The administration initially appeared to accept the supreme court decision and began printing census forms that did not include the question. But Mr Trump subsequently ordered the government to re-examine the issue in a tweet, prompting the justice department to explore alternatives.

Census-takers started asking about citizenship in 1820 but haven’t posed the question to every household since 1950.

Mr Trump said last week that he may issue an executive order to add the question, telling reporters that there are “a number of different avenues”.

A federal judge on Monday rejected a request by the Trump administration to assign a new legal team to a lawsuit that blocked the US from adding the proposed citizenship question.

US district judge Jesse Furman in Manhattan called the government’s request “patently deficient,” adding that the US had provided “no reasons, let alone ‘satisfactory reasons,’ for the substitution of counsel”. He said the government has to show that replacing the team won’t further delay the suit.