Irishman jailed in US ‘without warning’ after years seeking residency 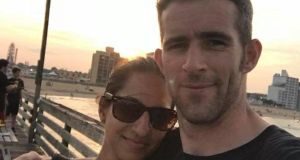 An Irishman imprisoned in the US after being lifted “without warning” by immigration officials after almost 10 years working to secure his citizenship is being treated like a criminal, his devastated wife has said.

Father-of-three Keith Byrne, 37, from Fermoy, Co Cork, was on his way to work — a painting and decorating business he built up over the last five years — in Montgomery County, outside Philadelphia, on Wednesday morning when he was pulled over.

US Immigration and Custom Enforcement (ICE) officers in unmarked cars arrested him, before he was sent to Pike County Correctional Facility, a prison in Pennsylvania, where he is being held since.

His wife of 10 years, US citizen Keren Byrne, 34, said he was “picked up off the street without warning” leaving her and their three children — aged 13, six and four — “devastated”.

“The kids are sad and confused,” she told the Irish Times, breaking down crying.

“They miss their dad. They are asking me why he can’t come home.”

Mrs Byrne said her husband can’t see in prison because he has no contact lenses and doesn’t have access to drinking water. She speaks to him by phone, but the calls are timed, full of static and hard to hear.

She said the pain of her children “makes my stomach turn in sick waves of panic, loss, sadness”, adding that her husband “did nothing but work hard to build a life better than the one he left behind to have it all torn away from him, from us.”

Mr Byrne has been “openly and honestly” working with immigration authorities since 2010 to “adjust” his status in the US. He travelled there legally in 2007 and the couple met the following year — “We fell in love immediately, it was very intense,” she said — before getting married in 2009.

Since then, he has been raising her eldest son (13) from another relationship, and the couple also have a daughter (6) and son (4) together.

His efforts to secure residency have been hampered by two separate charges of personal use of cannabis from when he was younger in Ireland, said Mrs Byrne.

She stresses he was never an undocumented immigrant, and when his visa expired he “quickly went through all the honest and legal routes to change his status.”

“During the nine years we have been doing that, he was legal,” she said. “He had work authorisation, a social security number, paid all his taxes — he was not living here in the shadows. It was all very open from the beginning.”

Shortly after the couple bought their first home in February this year — “he worked every evening and weekend to fix it up and make a nice home for us all” — a final appeal against his being refused residency was denied.

“Keith is in a cell, behind bars,” said Mrs Byrne. “It is completely absurd, he is being treated like an absolute criminal.

“We didn’t know time was running out, that ICE was going to come after him.

“I don’t want to say we weren’t scared that this could happen, but we did not think through being honest and doing the right thing, that it would have this kind of consequence.”

Mrs Byrne said they are being kept in the dark about what will happen next and when.

“I just want him out of there. It is horrendous to think of him locked up like that.

“Keith would lend a helping hand to anyone. His heart is huge, he has so much room in it. He just doesn’t deserve this.

“He is so hard working — the kind of guy that gets up early and comes home later just because he wants a better life for us. He has worked so hard to get us to where we are today.

“It is completely heartbreaking to think he could not be here to enjoy and reap all of the rewards he deserves so much.”

Mrs Byrne said if he is deported back to Ireland, it is not simply a matter of everyone following him and a “happy ending”.

“It is extremely complicated,” she said. “My oldest son has his own father and family in the US. Going to Ireland would split our families apart.”

Her only hope is that “someone, somewhere will do the right thing”, she said.

Mrs Byrne said she spoke to the Irish consulate in New York who “were supportive but said they could not really do anything to intervene.”

“It is disappointing when you are making calls to everyone you can think of, and everyone is turning you away — it is nothing but disappointment,” she added.

A spokesman for Department of Foreign Affairs and Trade said: “In line with our usual practice, we do not comment on individual cases.”

In a statement, Adrian Smith, public affairs officer with ICE, said: “In 2007, Keith Byrne, 37, a citizen of Ireland, entered the United States as a nonimmigrant under the Visa Waiver Program and failed to depart the United States under the terms of his admission.

“ICE arrested him July 10 for immigration violations and issued him a visa waiver removal order. He is currently in ICE custody pending removal.”