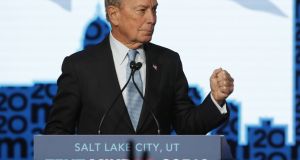 When voters in Nevada choose their candidate to become the Democratic nominee for president on Saturday at caucus sites across the state, one presidential hopeful will not be on the ballot.

Michael Bloomberg is not contesting the Nevada caucuses, having chosen to sit out the first four early-voting states and instead focus on Super Tuesday on March 3rd. But the former New York mayor has a ubiquitous presence.

This week was the break-out moment for Bloomberg, as the billionaire businessman’s campaign emerged from relative obscurity to top of the political agenda, unnerving his Democratic rivals in the race.

Signs that his three-month campaign was picking up steam surfaced early in the week, with the publication of two polls, confirming anecdotal evidence that his ground campaign was playing well with voters.

A poll from NPR, PBS NewsHour and Marist released on Tuesday put Bloomberg at 19 per cent nationally, up from 4 per cent in December. A Washington Post-ABC poll the following day placed him at 14 per cent up from 8 per cent a month earlier.

Though Bernie Sanders still remains well in the lead nationally, Bloomberg’s rise in recent weeks has been one of the unexpected features of the 2020 presidential campaign as Democrats seek to choose a candidate to take on Donald Trump in November’s presidential election.

Despite a record number of candidates declaring last year, the Democratic field has winnowed to eight. As serious contenders like Kamala Harris, Beto O’Rourke and Corey Booker bowed out after months of campaigning, Bloomberg bided his time.

In November he announced his candidacy. It was not entirely unexpected. Bloomberg had signalled his interest in running against Trump as a moderate, and has toyed with presidential runs in previous election cycles. Uniquely among the candidates, he chose not to contest the first four early voting states – Iowa, New Hampshire, Nevada and South Carolina – instead focusing on the states that vote on Super Tuesday and beyond.

This week’s polling suggests that his strategy may have paid off. As his rivals raced around the snowy early voting states of Iowa and New Hampshire spending money and scavenging for votes, Bloomberg was devising a formidable advertising and ground campaign, focusing on the later voting states, which send a larger number of delegates to the party’s convention in July.

Much like Donald Trump benefited from a historically large Republican field in 2016, Bloomberg has profited from a particularly wide and uncertain Democrat race. This fluidity was underscored by this month’s Iowa and New Hampshire caucus and primary which yielded no stand-out winner, but instead resulted effectively in a split vote, with no single candidate securing more than 25 per cent in either state.

Bloomberg’s February surge also came as a result – or at the expense – of one particular candidate: Joe Biden. Bloomberg himself has explicitly linked his campaign to the fortunes of Biden. He indicated last year that he would not run for president if the former vice president threw his hat in the ring, arguing that a moderate candidate was needed to defeat Donald Trump.

As a result, his announcement to run late last year was a telling sign that Biden’s campaign could be in difficulty.

Biden’s standing in state and national polls has been falling in inverse proportion to Bloomberg’s rise. The future of the former vice president’s campaign now hinges on the outcome of tonight’s Nevada caucus and next Saturday’s South Carolina primary, where Biden is counting on the support of African-American voters. A convincing win is vital, as he seeks to keep donors on board.

Nonetheless, Bloomberg’s path to the presidency is far from secure. On Wednesday he took to the debate stage in Las Vegas after his strong polling numbers qualified him for a Democratic debate for the first time.

From the get-go he came under sustained attack from his rivals. Within seconds Bernie Sanders focused on the “stop and frisk” policy presided over by Bloomberg while mayor of New York which disproportionately affected innocent young black males. Others called on him to release his tax records, by implication drawing immediate comparisons with Donald Trump, who has broken with presidential precedent and refused to release his returns.

But his track record with women could cause the most problems for the former mayor. Elizabeth Warren, the senator from Massachusetts who is struggling in the polls, went on the attack, claiming that he had called women “fat broads and horse-faced lesbians,” citing allegations by a former employee.

She pressed him on the non-disclosure agreements he signed with female employees, forcing him to admit that he would not release any of the women from the agreements as they had entered them consensually.

None of the women had accused him of doing anything wrong, he said, “except maybe they didn’t like the joke I told” – a quip that shows a lack of comprehension about the dynamics of sexual harassment in the work place that is unlikely to sit well with women voters in the #MeToo era.

Unsurprisingly Bloomberg’s immense wealth was a talking point during the debate, as his rivals struggled with an obvious conundrum – how do you take on a candidate with so much money?

Bloomberg’s fortune is estimated at $62 billion, and the New Yorker is the ninth richest person in the world according to Forbes.

Since announcing his candidacy in November he has spent over $400 million on advertising – dwarfing the spend of other candidates – and has employed more than 2,000 staff on the campaign trail.

His advertising strategy depends heavily on television – he spent $10 million on one single 60-second ad that ran during the Super Bowl game on February 2nd and has been bombarding voters across the country with targeted ads, such as one this week featuring voters who have switched their support from candidates like Biden and Sanders to Bloomberg.

He has also ploughed money into social media, attracting some criticism – and ridicule – for his sponsored internet “memes” that are bombarding web platforms.

His rivals have accused him of buying the election, while his candidacy has again raised important questions about the role of money in the US election system

Questions have also been raised about Bloomberg’s philanthropic work. The 78-year-old has spent millions of dollars on causes from education to climate change to gun control, as well as support for an array of Democratic candidates in 2018.

Critics wonder if the fear of alienating a generous donor may influence the decision by many senior figures to give him their much-coveted endorsements. Several prominent African-Americans, for example, have endorsed the former mayor – a huge boost for Bloomberg as he seeks to win more racially diverse states in America.

The potential conflicts of interest also extend to his business. His campaign said this week that he will sell his eponymous financial data and media company if elected president, but his candidacy has prompted headaches for the thousands of journalists who work for the Bloomberg media brand as well as advertisers.

Nevertheless, Bloomberg remains one to watch.

Polls show Democratic voters are desperate to choose someone who can beat President Trump in November, and the party lacks a stand-out candidate at this point in the race, such as a Bill Clinton or Barack Obama. Mike Bloomberg could be well-positioned – particularly among voters opposed to the socialist message espoused by front-runner Bernie Sanders. The Democratic establishment – many of whom are aghast at Sanders’ formidable performance in polling – may also seek to get behind one moderate candidate.

Though Bloomberg’s performance was poor in Wednesday night’s debate, it is unclear how many potential Democratic primary voters tuned in to the debate. His campaign team are hoping that the continuing advertising blitz may erase or override any stilted debate performance.

Despite his questionable Democratic credentials – he ran for New York mayor as a Republican after all – his progressive stance on gun control, climate change and past financial support for reproductive rights groups may persuade lukewarm voters to back him despite their reservations.

With the primary campaign entering a crucial few weeks in the run-up to Super Tuesday on March 3rd, polling suggests that a Bernie versus Bloomberg race is one possible scenario. Despite their radically different ideological positions – Bernie the veteran socialist who honeymooned in the Soviet Union, Bloomberg the arch-capitalist – there are similarities. Both are in their late-70s, and either would be the first Jewish US president if elected.

The prospect of two septuagenarian men fighting it out to take on Donald Trump – himself a 72-year-old billionaire – may disappoint many Democrats who yearn for a candidate who better reflects the average Democratic voter.

But with less than nine months to go until Americans go to the polls, it’s an ever more likely looking scenario.