Window of opportunity to contain international spread of the virus is closing, WHO warns 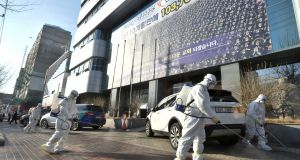 Workers from a disinfection service company sanitize a street in front of a branch of the Shincheonji Church of Jesus the Temple of the Tabernacle of the Testimony where a woman known as “Patient 31” attended a service in Daegu, South Korea. Photograph: Yonhap/Reuters

The coronavirus has infected hundreds of people in Chinese prisons, authorities said on Friday, contributing to a jump in reported cases beyond the epicentre in Hubei province, including 100 more in South Korea.

A total of 234 infections among Chinese prisoners outside Hubei ended 16 straight days of declines in new mainland cases.

Another 271 cases were reported in prisons in Hubei - where the virus first emerged in December in its now locked-down capital, Wuhan - though provincial officials did not say when they had been diagnosed.

State television quoted Communist Party rulers as saying the outbreak had not yet peaked, and more than 30 cases in a hospital in Beijing highlighted a sharp jump in the tally there.

US activity in both the manufacturing and services sectors stalled as companies have grown increasingly concerned about the virus, a survey of purchasing managers showed on Friday.

US stock indexes fell after data showed US business activity stalled in February and the rise in new Covid-19 cases sent investors scrambling for safer assets such as gold, which jumped to its highest in seven years.

Data also showed Japan’s factory activity suffered its steepest contraction in seven years in February, underlining the risk of a recession there as the impact of the outbreak spreads. Asian and European stocks also fell.

With finance leaders from the Group of 20 major economies set to discuss risks to the world economy in Saudi Arabia at the weekend, the International Monetary Fund said it was too early to tell what impact the virus would have on global growth.

The World Health Organisation warned that the window of opportunity to contain the international spread of the epidemic was closing after cases were reported in Iran and Lebanon.

The virus has emerged in 26 countries and territories outside mainland China, killing 11 people, according to a Reuters tally.

“This outbreak could go in any direction,” WHO chief Tedros Adhanom Ghebreyesus said in Geneva. “If we do well, we can avert any serious crisis, but if we squander the opportunity then we will have a serious problem on our hands.”

Chinese vice science and technology minister Xu Nanping said China’s earliest vaccine would be submitted for clinical trials around late April. That timetable is in line with research in other countries, and a World Health Organisation estimate of a vaccine reaching the market in about 18 months.

As international authorities seek to stop the virus from becoming a global pandemic, public health officials are hoping for signs that the arrival of warmer weather in the northern hemisphere might slow its spread.

The spike in cases in two jails outside Hubei – in the northern province of Shandong and Zhejiang in the east – made up most of the 258 newly confirmed Chinese infections outside the epicentre province on Friday.

Authorities said officials deemed responsible for the outbreaks had been fired and the government had sent a team to investigate the Shandong episode, media reported.

Hubei, adding to confusion about numbers, doubled the number of new cases it reported on Wednesday to 775 from 349. Provincial authorities said they would add back some cases to their tally, after they adjusted their methodology to count only cases that were detected with genetic tests, rather than with CT scans.

South Korea is the latest hot spot with 100 new cases taking its total to 204, most in Daegu, a city of 2.5 million, where scores were infected in what authorities called a “super-spreading event” at a church, traced to an infected 61-year-old woman who attended services.

South Korean officials designated Daegu and neighbouring Cheongdo county as special care zones where additional medical staff and isolation facilities will be deployed. Malls, restaurants and streets in the city were largely empty with the mayor calling the outbreak an “unprecedented crisis”.

Another centre of infection has been the Diamond Princess cruise ship held under quarantine in Japan since February 3rd.

Japan reported the deaths of two elderly passengers on Thursday, the first fatalities from aboard the ship where more than 630 cases account for the biggest cluster of infection outside China.

The country confirmed 13 new cases, two of whom had died. Most have been in Qom, a Shia Muslim holy city where health officials on Thursday called for all religious gatherings to be suspended.

Ukraine’s health minister joined evacuees from China for two weeks’ quarantine in a sanatorium on Friday in a show of solidarity after fears over the possible spread of the coronavirus led to clashes between protesters and police. – Reuters

Covid-19: Six further deaths as reproduction rate ‘at or above one’