Police fired shots in the air outside of a Kampala court after academic Stella Nyanzi was cleared of cyberbullying in relation to a Facebook post she made about Uganda president Yoweri Museveni. Video: Sally Hayden 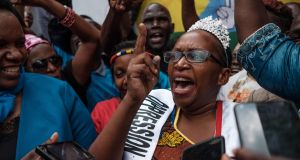 Ugandan activist and writer Stella Nyanzi speaks outside the court in Kampala on Thursday after a judge overturned her conviction for cyber harassment of president Yoweri Museveni. Photograph: Sumy Sadurni/AFP via Getty Images

Tedious legal proceedings escalated into police firing live ammunition when Ugandan academic, feminist and poet Stella Nyanzi was cleared of cyberbullying charges at a Kampala court on Thursday. She had already spent more than a year locked up in prison for insulting President Yoweri Museveni on Facebook.

Nyanzi – who is known for her strategy of “radical rudeness” – had previously been arrested for calling the president a “pair of buttocks”. In 2018, she wrote a poem to mark Museveni’s 73rd birthday, saying it was a “horrifically cancerous” day and she wished he had been suffocated by his mother’s vagina.

Museveni – who has been in power in Uganda since 1986 and is running again in next year’s election – has been repeatedly criticised by activists and human rights groups for using vague charges and lengthy legal proceedings to attack opposition figures.

Nyanzi was accused of carrying out cyber harassment and offensive communication under Uganda’s Computer Misuse Act, and last August she was sentenced to 18 months in prison. At that ruling she appeared in court by video link, flashing her breasts in protest and swearing at the camera.

On Thursday, the judge kept Nyanzi and her supporters waiting in the international crimes division of the Ugandan high court for 2½ hours after the scheduled 8.30am start time for the ruling on her appeal against her conviction.

While waiting she smiled constantly, calling out to supporters and signing copies of the book of poetry she had written in prison, No Roses from My Mouth. She offered a copy to a police officer. “She failed to stop me from writing in prison, now she wants to censor the book,” said Nyanzi to a friend.

Nyanzi also posed for photographs, raising her middle finger to the courtroom, and spoke about the “fun” she had had while locked up. After two hours of waiting, she joked that she would have to deliberately avoid composing a poem for the judge. “I need him to set me free so I can’t do that.”

“Please call the judge,” she asked again, shortly afterwards. “The whole world is waiting for the judgment.”

When he finally arrived, Judge Henry Peter Adonyo spoke for roughly an hour, slowly talking through the charges while pausing to define things like computers, and quoting a definition of cyber harassment that he said he had found online. Nyanzi was expected to stand the whole time.

Eventually, Adonyo ordered her “immediate release” from prison, saying the lower court lacked jurisdiction to prosecute her and there hadn’t been a fair hearing. Cheers were muted as it became clear authorities expected Nyanzi to return to prison again before she could officially be released.

Outside the courtroom, Nyanzi’s supporters put a tiara on her, calling her “the queen”.

“Why was I in prison for more than one year?” she asked a crowd of politicians, activists and journalists. “Why is the current regime of Uganda oppressing Ugandans who are expressing their constitutional rights?”

She called for the opposition to stick together, before chanting: “Museveni must go.”

Police began to try to break up the group, saying Nyanzi could not speak to people on court property.

In the scuffle that followed, the 45-year-old poet collapsed. Supporters then tried to lift her to the gates of the compound, saying they were taking her to hospital. Police first blocked the way, before firing from their guns to frighten the crowd when they made it outside.

Activists who remained behind accused the government of playing a cat-and-mouse style game with opposition figures. Harold Kaija, deputy secretary general of the Forum for Democratic Change (FDC) opposition party, told The Irish Times that what had happened showed that even when there was a fair ruling in court, it was not respected.

“It is what we are fighting for, to stop this kind of impunity . . . We must have justice, we must respect institutions and make people live free.”

He said there was a real fear that Nyanzi would be quickly rearrested. “This is the kind of story that happens. When you’re given justice you [still] wait to see, do I reach home?” he said, comparing the ruling National Resistance Movement party to a “mafia”.

Nyanzi has also complained about the legal system. In the last poem she posted on Facebook, before her sentencing in August 2019, she wrote: “I did not come to your court for justice. I came to continue poking the leopard’s anus. I did not enter your court for legal battle. I was already condemned before I came in.”