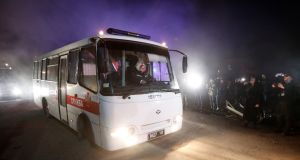 Buses transporting evacuees from coronavirus-hit China’s Hubei province drive past demonstrators during a protest against their arrival. Photograph: Vlaentyn Ogirenko/Reuters

Ukraine’s health minister has gone into quarantine with 72 evacuees from China to calm panic over the coronavirus, after villagers clashed with police and set up roadblocks to stop the returnees reaching a sanatorium.

Zoryana Skaletska said she would run the ministry remotely for a fortnight while living in a medical centre in the village of Novi Sanzhary in central Ukraine, which is being guarded by hundreds of police after chaotic scenes on Thursday.

Nine police officers and one local resident were injured and 24 people detained when protesters burned barricades and hurled rocks at buses bringing 45 Ukrainians and 27 citizens of other countries to Novi Sanzhary, after they were flown to Kharkiv in eastern Ukraine from Wuhan, the centre of the coronavirus outbreak.

Ukrainian officials assured the nation that none of the evacuees showed any symptoms of the so-called Covid-19 virus, which has infected more than 76,000 people – almost all of them in China - and claimed more than 2,200 lives.

Ukraine’s security services, meanwhile, are investigating the source of a hoax email purportedly from the health ministry in Kiev, which sowed alarm by claiming falsely that several cases of the disease had been detected in Ukraine.

“I’ve decided to join the people under observation. I will spend the next 14 days together with them in one facility, in the same conditions. I hope my presence will reassure people in Novi Sanzhary and in the rest of the country,” Ms Skaletska announced on Facebook late on Thursday night.

“What happened today, the panic and rejection, the negativity and aggression, made a very strong impression on me. It shocked the people evacuated from China even more. So I ask you to give them words of support and thanks for agreeing to spend two weeks in isolation for the sake of the safety of us all,” she added.

“I will be in constant contact with the ministry. All the deputy ministers will work constantly. I have a telephone and Skype. We will conduct meetings and the ministry will not be left without leadership.”

One woman posted a video online in which she and other evacuees laugh about conditions in the ageing sanatorium, complaining about its old furniture, the broken lock on her door and a bathroom where she says she got an electric shock in the shower.

Many Ukrainians posted social media messages on Friday denouncing the behaviour of the villagers and expressing solidarity with the evacuees.

Ukrainian president Volodymyr Zelenskiy called Anastasiya Zinchenko, a young woman who refused to leave her pet dog behind in Wuhan, and promised to find a way to get them both home.

“Attempts to close roads, block hospitals and not allow Ukrainian citizens into Ukraine - this shows far from the best side of our character,” Mr Zelenskiy said on Thursday.

“Especially when you consider that most of the passengers are people under 30. They are almost like children to most of us,” he added.

“Ukraine won’t forsake its own. This will be state policy – I guarantee you that. But it should also be the reaction of society, and I really hope that it will be.”

Also on Friday, Iran reported two more deaths from the coronavirus and said the fatalities were from among 13 new confirmed cases of the virus.

The report by the semi-official Mehr news agency came as Iranians voted in nationwide parliamentary elections.

After authorities reported two deaths earlier this week, the death toll from Covid-19 stands at four.

So far, 18 cases have been confirmed in Iran, including the four who died.

Health ministry spokesman Kianoush Jahanpour said the newly detected cases are all linked with the city of Qom, where the first two elderly patients died on Wednesday.

Mr Jahanpour said the new cases were either from Qom or had visited the city recently.

He said four of them are in hospital in the capital Tehran and two in the northern province of Gilan.

Minoo Mohraz, an Iranian health ministry official, said the virus “possibly came from Chinese workers who work in Qom and travelled to China”.

A Chinese company has been building a solar power plant in Qom.

At a news conference in Beirut, he said the patient was a 45-year-old woman who arrived on Thursday on a flight from Qom.

He said the woman was in “good health” and the ministry was also following up on the cases of two other people suspected of having the illness.

The woman and two other suspected victims were quarantined at the Rafik Hariri government hospital in Beirut.

Concerns over the spread of the virus, which originated in central China, prompted authorities in Iran this week to close all schools and Shiite seminaries in Qom, about 130km south of Tehran. – Additional reporting AP