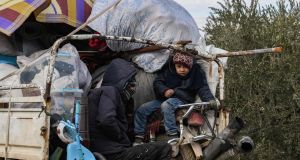 A truck passing through the town of Jindayris in Syria’s Aleppo province. Displaced Syrians are fleeing from advancing government forces in Idlib and Aleppo provinces. Photograph: Rami al Sayed/AFP via Getty Images

Turkey’s foreign minister Mevlut Cavusoglu said on Sunday that he told his Russian counterpart that attacks in Syria’s northwestern Idlib region must stop immediately, and that a lasting ceasefire had to be achieved there.

Turkey and Russia have collaborated on a political solution to the Syrian conflict but back opposing sides. a Syrian government offensive in Idlib has raised tensions between them.

“We told [Russia on Saturday]...that the aggression in Idlib must stop, and that a lasting ceasefire has to be achieved now,” Mr Cavusoglu told reporters in Germany after a Munich security conference.

Turkish and Russian officials will discuss the issue in Moscow on Monday, he added.

Hundreds of thousands of civilians in Idlib province are scrambling to escape the widening, multi-front offensive by President Assad’s forces.

“What matters is today around one million people from Idlib have been moving towards our border,” Turkey’s president Recep Tayyip Erdogan said in a statement after a phone call with US president Donald Trump in which they discussed Syria and other topics.

“We are already hosting 3.5 to 4 million people. Unfortunately we are not in a position of accepting another one million.”

The Russian-backed offensive marks a major strategic accomplishment for Mr Assad, having driven insurgents from the main highway between Aleppo and Damascus to reopen the fastest route between Syria’s two biggest cities for the first time in years.

Recently,Syrian forces have turned their focus to an area northwest of Aleppo where they are trying to seize more ground to push rebels away from the city. Russian warplanes mounted heavy air strikes in the area on Sunday, bombing towns including Anadan, activists reported.

A suicide bomber with the main insurgent group in the area, the jihadist Hayat Tahrir al-Sham faction, blew himself up in an attack on Russian positions in the town of Kafr Aleppo, the Ibaa news outlet affiliated with the group reported.

Mr Erdogan has said his military will drive back Syrian forces if they do not withdraw out of Idlib by the end of the month. On Saturday he appeared to pull that date forward, saying Turkey would “handle it” before the end of the months if there was no pullback.

Mr Cavusoglu also said he met with some US law-makers at the conference, saying Washington should work to improve its relations with Ankara anyway, not just due to current tensions between Turkey and Russia. “We told them that we expected a sincere approach from the United States in line with our spirit of alliance,” he said.

Kenneth Roth, executive director of Human Rights Watch, said at a news conference that Russia was the key to stopping the crisis since it provided the Syrian government with aerial support. “Russia offers various excuses,” he said.

He acknowledged the presence of thousands of jihadists in Idlib, but said “that does not justify the indiscriminate bombardment of the civilian population”.

“What is needed now as a matter of humanitarian concern for the people of Idlib and as a matter of basic avoidance of another refugee crisis, is firm pressure on [Russian president Vladimir] Putin to stop,” he said.

He urged Europe to exert that pressure. – Reuters/AP