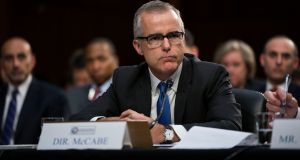 The US department of justice dropped charges against former deputy FBI chief Andrew McCabe on Friday, almost two years after he was investigated for illegally leaking information to the media.

Lawyers for Mr McCabe – who US president Donald Trump previously described as a “sleazebag” – said they had been informed that the case was being dropped.

“We said at the outset of the criminal investigation, almost two years ago, that if the facts and the law determined the result, no charges would be brought,” they said in a statement. “We are pleased that Andrew McCabe and his family can go on with their lives without this cloud hanging over them.”

The timing of the decision could indicate that attorney general William Barr is seeking to assert his independence from the president. It emerged less than 24 hours after Mr Barr criticised Mr Trump in an interview with ABC for tweeting his views on criminal cases.

“I cannot do my job here at the department with a constant background commentary that undercuts me,” he said, in a rare rebuke by a cabinet member to the president.

His intervention followed days of controversy over the conviction of Mr Trump’s long-time ally Roger Stone on charges of lying to Congress, obstruction and witness intimidation.

The department of justice revised its initial request for a sentence of up to nine years, instead pleading for a more lenient sentence, prompting four federal prosecutors on the case to resign earlier this week.

But in a sign that Mr Barr may be still committed to implementing the Trump administration’s priorities, the New York Times reported on Friday that he had appointed an outside prosecutor to review the criminal case against Michael Flynn.

Mr Trump’s first national security adviser struck a plea deal with prosecutors in December 2017 over making false statements to the FBI about his dealings with the Russian ambassador and other matters. But there were reports last month that he was seeking to withdraw that guilty plea ahead of his sentencing this year.

Mr Barr’s stewardship of the department of justice is under intense security, amid accusations by Democrats that he is bowing to pressure exerted by Mr Trump in high-profile cases including the Stone conviction. Mr Stone is due to be sentenced next week.

Despite Mr Barr’s apparent public rebuke of the president, Mr Trump took to Twitter on Friday to assert his right to involve himself in criminal cases – a legally ambiguous area when it comes to presidential power.

Quoting Mr Barr’s statement that he had never been asked by the president to do anything in a criminal case, Mr Trump wrote: “This doesn’t mean that I do not have, as president, the legal right to do so, I do, but I have so far chosen not to!”

It also emerged that Mr Trump had been notified in advance of Mr Barr’s interview on ABC.

Mr McCabe, who was deputy to former FBI chief James Comey and has been a frequent critic of Mr Trump in US media, expressed relief at the outcome, though he said it was an “absolute disgrace” that it took two years to reach an “obvious conclusion”.